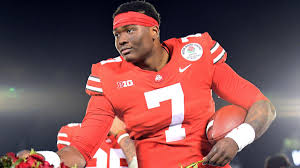 The Washington Redskins had a good night last evening in the 1st round of the 2019 NFL Draft in Nashville. The Redskins entered the night with the 15th pick and a ton of rumors of moving up or down. The night changed for the Redskins when the New York Giants selected QB Daniel Jones with the 6th overall pick. With that move and the Miami Dolphins passing on a quarterback as well, the quarterback most rumored to the team fell right to 15. The Redskins selected quarterback Dewayne Haskins from Ohio State.

Haskins, the Potomac Maryland native and Bullis School Alum, in 14 games last season for Ohio State completed 373 of 533 passes for 4,831 yards and 50 touchdowns. Haskins, who is widely considered the best pocket passer in the draft, should look to come in and compete with Colt McCoy and Case Keenum right away. Coach Jay Gruden generally doesn’t like grooming new quarterbacks but the team had to get a young signal caller on the roster.

In a surprising move, the Redskins traded with the Indianapolis Colts to get another first round pick. The Redskins added OLB/DE Montez Sweat of Mississippi State with the 26th pick of the round. Sweat was a combine stud running a stunning 4.41 second 40 yard dash at 260 pounds. Sweat started his career at Michigan State where he didn’t play much and transferred to Mississippi State. There he started all 26 possible games where he totaled 101 total tackles, 30 tackles for loss, and 22 sacks. Sweat dropped in the first round of a reported diagnosis of hypertrophic cardiomyopathy, a condition in which a portion of the heart becomes thickened. Sweat went to another doctor who said that he was misdiagnosed with the condition. The Redskins traded away their second round pick this year and next year for to move up and draft Sweat.

The Redskins so far have had a great draft and look continue that tonight and tomorrow. As it stands at this moment have two picks in the 3rd round (76th and 96th overall picks,) and five more picks tomorrow. Areas of need for the team are: LG/C, WR, TE, and FS. This has been a primarily lineman draft, so there are plenty of talent available to the Redskins tonight and tomorrow.