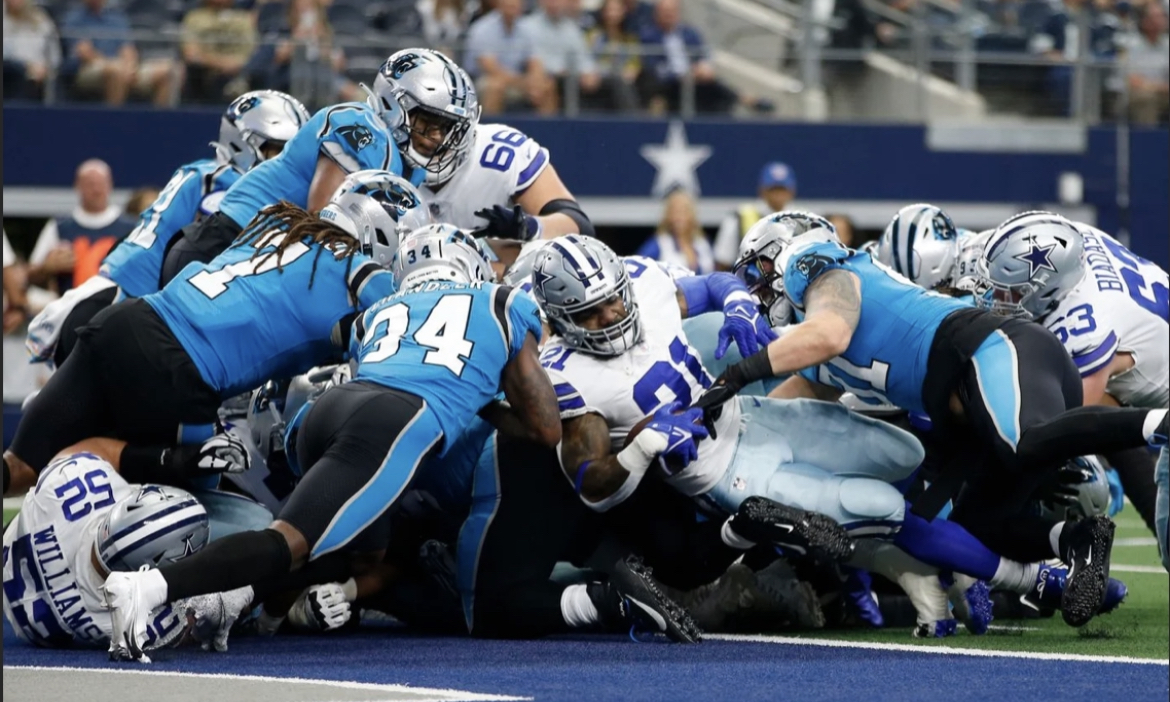 The best way to describe the Week Four matchup between the undefeated Carolina Panthers and the Dallas Cowboys is a litmus test for both squads.  The Panthers defense came into the game leading the league in almost every statistical category but Cowboys quarterback Dan Prescott is playing some of his best football.  Not making things any easier – Carolina lost two starters in the secondary in their win over the Houston Texans in Week Three.

After trading a couple of three-and-outs, the Cowboys cracked the scoreboard first on a 1-yard touchdown run by Ezekiel Elliott.  That scoring drive was not without its miscues – Prescott fumbled, but recovered, the snap and converted on 1st-and-20.  It was the first time the Panthers trailed this season.  On the next drive, receiver DJ Moore had an insane catch-and-run very reminiscent of legend Steve Smith.  Chuba Hubbard, starting in place of the injured Christian McCaffrey, had some impressive carries to set up the 1-yard rushing touchdown by quarterback Sam Darnold.

The next series was as eventful as can be.  Dallas tight end Dalton Schultz appeared to fumble twice – both recovered by the Panthers; both reversed.  The Cowboys retained possession and went on to regain the lead on an 18-yard touchdown reception by tight end Blake Jarwin.  The Panthers were flagged for having too many men on the field, prompting the Cowboys to attempt a 2-point conversion which failed; making the score 13-7 in favor of Dallas.  The Panthers would regain the lead when Darnold carried 11 yards for his second score of the day.  His five rushing touchdowns are the most by a QB in the first four games of a season in the NFL’s Super Bowl era and gave the Panthers a 14-13 lead going into halftime.

What happened the third quarter can only accurately be described by the word, implosion.  After deferring to the second half, the Panthers opened the third quarter with a missed 54-yard field goal attempt by Zane Gonzalez.  The Cowboys scored on their next four possessions – three touchdowns and a field goal.  The first score of the half was a 35-yard bomb to Amari Cooper with new Panthers cornerback CJ Henderson in coverage.  A 47-yard scamper by Elliott set up a 6-yard touchdown reception by Schultz and the score was 26-14 in favor of the Cowboys.  The Cowboys’ next 10 points came off turnovers as cornerback Trevon Diggs intercepted Darnold on consecutive possessions.  Diggs became the first Cowboys player in history to have four consecutive games with an interception.

The Panthers’ scoring drought didn’t end until the fourth quarter when Darnold found Moore in the end zone on two consecutive possessions to cut the lead to 8 with 4:31 left in the game.  That was the closest they would get as they suffered their first loss of the season 36-28.  They host the Eagles at Bank of America Stadium for Week 5.