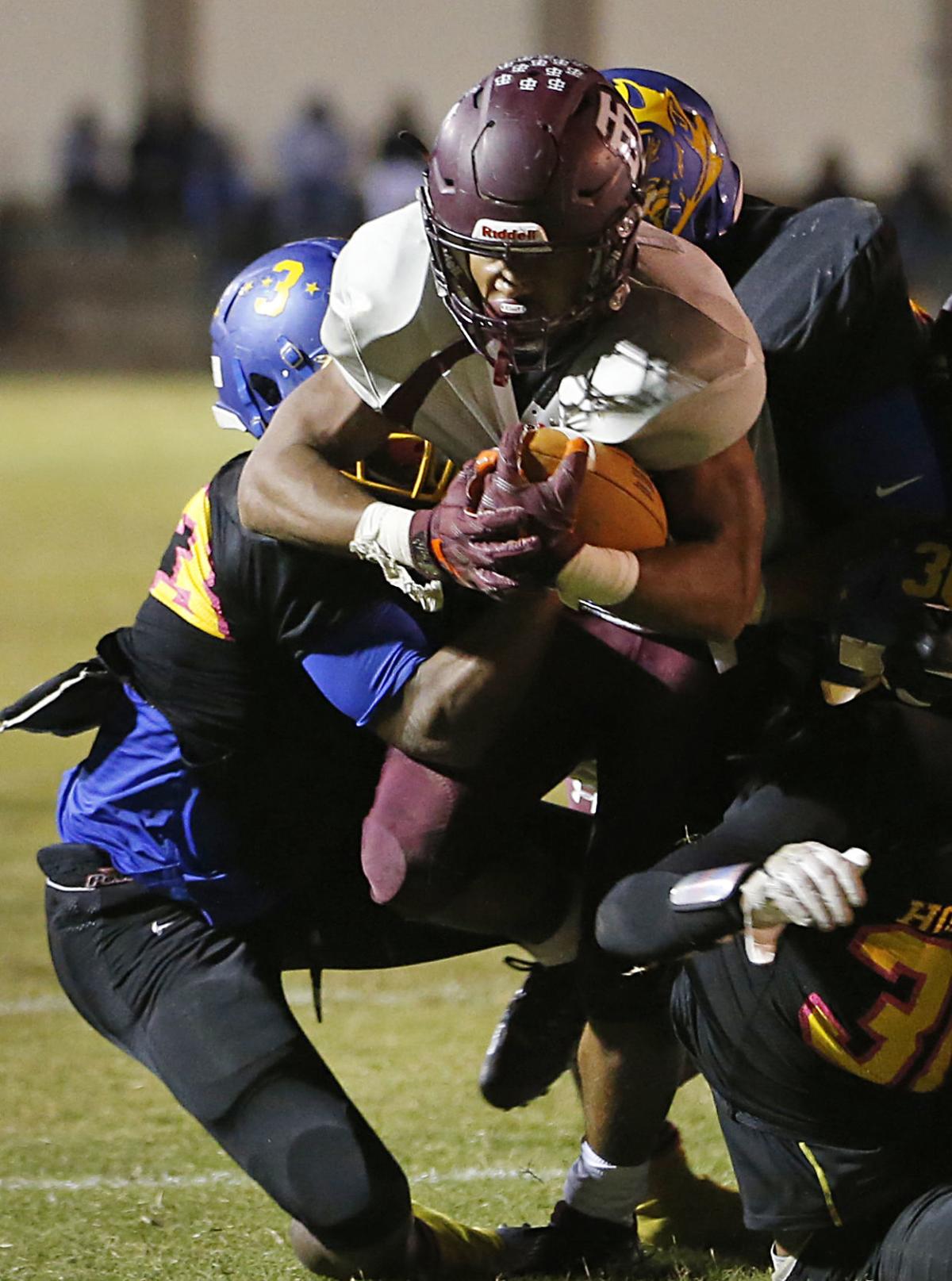 In terms of football excitement, it was the most exciting game that I have ever witnessed. With
the score knotted at 28-28 at the half, it felt like an entire game had been played. When the
offensive production of the first half was matched by mostly quality defense in the second half,
a 35-35 score ensued, and then fans were treated to two overtime periods that were simply
incredulous.
On the one hand, such a quality game makes sense when you examine each football program
– two well-coached teams with great mutual respect ( Hopewell’s Ricky Irby and Dale’s Kevin
Tucker) squaring off on a spectacular fall evening. The undefeated Blue Devils were looking,
at “their house”, to take care of the Knights, who last year turned the lights out on them 41-6 in
Chester.
For Hopewell fans, it was the best and worst of times, and many would scratch their heads
afterward with the “if only” phrase. “If only” there weren’t the two lost fumbles, one in each
half, that led to 14 gift points for Thomas Dale. “If only” Hopewell could have played more
within themselves, as penalties caught up with them, unlike previous games. Coach Irby later
said that his team needs more discipline, and practice will not be fun this week.
Dale though faced a different challenge – the continued season-long trend of injured players.
Three more surfaced this game, including a broken collarbone to their current quarterback
Courtney Burrell. He had replaced earlier in the season Ejay Walker, who before he had
been injured, had almost led them to an upset of powerhouse Dinwiddie, before falling 35-31.
But when Burrell suffered his injury, it ironically led to greater production through their backup
“Wildcat” formation, explained well in John Adam’s good column also in today’s paper.
This game was filled with more irony: For their first three kickoffs, Dale chose to “pooch” their
kicks to avoid the big play return by Hopewell’s Sean Allen. Each time, lineman Reggie Ruffin
recovered the pooched kick. The fourth time, after Dale had taken a 28-21 lead, the Knights
chose to kick it long, and Allen returned it for an 80 yard touchdown! Needless to say, Dale
returned to pooch kicks afterward, and Ruffin recovered the next two as well!
Hopewell’s Robert Briggs showed how well he has bounced back from an ankle sprain three
games ago. On 24 carries, he amassed 193 yards and three TDs. While the defense did
have trouble trying to contain Dale’s All-State tailback Chris Tyree, ( 25 rushes, 113 yards, and
several good second and third effort runs), they did pick off two passes. Anthony Hale’s first-half pick led to a nimble shoe-laced grab of a Daniel Grier pass in the flat for a 10 yard TD by
Kadarius Singleton. Daquan Blow had the other interception. Hale and Nyvonte Coleman led
the Blue Devils with 16 tackles each ( solo and assisted), Co-Captain Zyreon Jones-Walker had
14, Trey Henderson 13, and Ruffin 10, including 4 tackles for losses.
Grier went 11-20 through the air for 161 yards and no interceptions. However, there were
several times when it appeared that he could have run away from pressure for first downs, as in
previous games. The Hopewell offense was also not good several times on fourth down and
short yardage, the most important one being with about 3 minutes left in the game, and around
the Dale 30 yard line.
The Wildcat offense for Dale then sparkled. They covered the 70 some yards with only several
plays to achieve the tie, and send the game into overtime.
While in the first overtime, Hopewell caught a break when Briggs, starting from his 10-yard line,
was hit hard at the two, fumbling into the end zone. An alert offensive lineman recovered for the
touchdown to keep the game alive. With the extra point good and Hopewell now leading 42-35,

Dale then took their turn from the 10-yard line. Hopewell shut them down for the first three
plays. However, wide receiver Deangelo Gray on fourth down, subbing for injured quarterback
Burrell, and continuing to line up in the “shotgun”, Wildcat formation, swept around left end for
the score from some 10 yards out to cut the Hopewell lead to one 42-41. Lined up to attempt
the point after, Hopewell was called for being offsides, which moved the ball half the distance to
the goal line. Then Coach Tucker decided to go for two points and win the game outright.
However, Dale was called for a false start, backing them up. They then returned to their
traditional one point kick, tying the game at 42-all.
Another coin-toss started the second overtime and led to Hopewell’s being on defense first.
Again, they had difficulty with the Wildcat formation, and Gray easily scored the go-ahead
touchdown and Dale led 49-42. Hopewell then on first down fumbled and lost several yards.
They had three more attempts to cross the goal line, but couldn’t as Dale’s defense proved to
be too much. As the game ended, Dale had, in my opinion, upset the better Hopewell team to
move their record to 6-2.
Now Hopewell must travel to Dinwiddie this Friday – a tall task – to avoid seeing their record
drop to 6-2. While Coach Irby can point to how Dale only loss to Dinwiddie by 4, he and his
coaching staff can also continue drawing out the best within each player. They believe that
they can beat Dinwiddie, and they have a higher goal to be the best they can come
playoff time.
Last year’s three regular-season losses in a row to the bigger schools of Dale, Dinwiddie, and
Meadowbrook helped Hopewell grow as a team, as they then prepared for their smaller
Division three playoffs. We know the rest of that story – they rounded into fine form, rattling off
5 playoff wins to take home the state championship!
Several days ago, the Houston Astro Baseball team discovered how hard it is to repeat as
World Series champions, losing to the very talented Boston Red Sox. So many factors come
into play when teams try to repeat as champions. Hopewell has the talent, and the desire, and
as Coach Irby indicated, needs the discipline to get them back to where they were last year.
Then there is the ability to adjust to the intangibles. I say this because one cannot predict how
circumstances will unfold. A perfect storm of circumstances can create upsets. Without the
injury to quarterback Burrell, Hopewell perhaps never would have seen the backup Wildcat
option that gave them fits. Dale made the best of a negative situation.
Hopewell can do the same. With the raw material of the game on film, they see the strengths
and weaknesses presented. Coach Irby and staff set the high bar with continued preparation
and motivation surrounding talented individuals. The players assimilate all that and are better
prepared when the intangibles present themselves.
Finally, while not preferring one team over another, God is available as a resource – His
guiding Presence and Peace, as these team members, seek to utilize all that they have
available to them to create the best possible result. May that be true of us in the Tri-Cities as
well. I can’t think of a better place for all of us to place our hope in than in God.
Jeff Butler is the Pastor of Woodlawn Presbyterian Church in Hopewell and is the Play by Play
Voice for the Hopewell Blue Devils over WHAP Radio 1340AM and 96.9 FM. The game can
also be heard online at www.foxsports1340am.com or a cell phone at 605-313-0571.
Tonight at 6:30, you’re invited to “Simply Unique”, at 230 S. 15th St. in Hopewell for the Coach
Ricky Irby Show. The Show which can be heard on WHAP radio will be broadcast throughout
the facility.