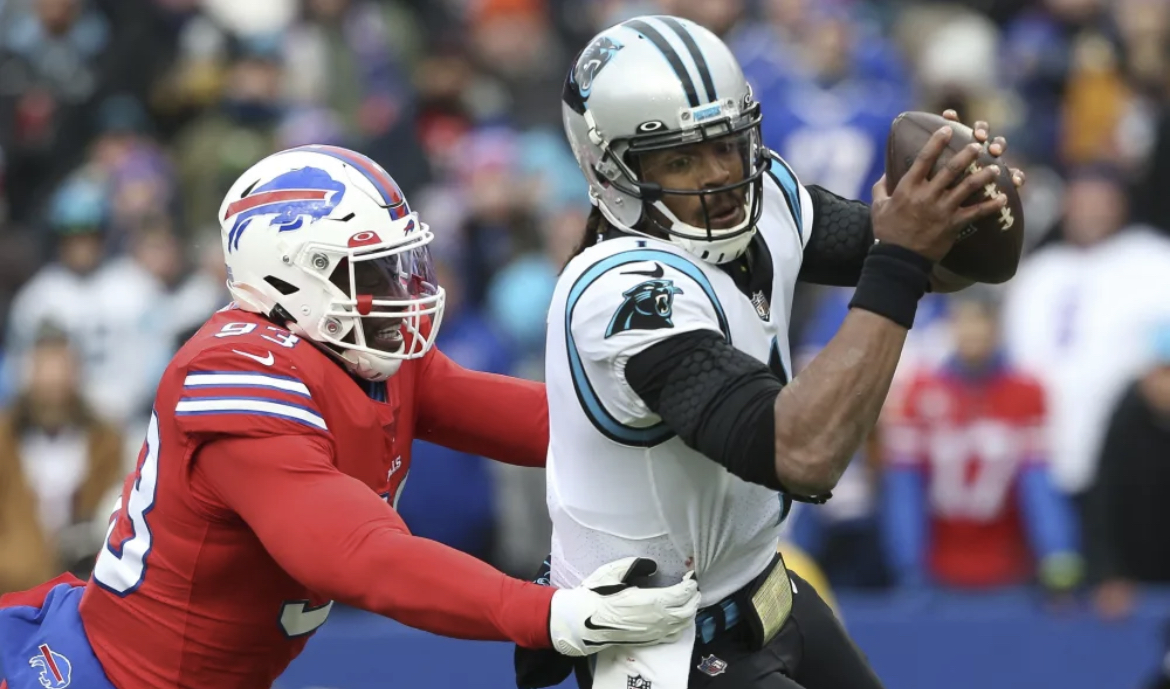 As if the Carolina Panthers hadn’t been bitten by the injury bug enough this season – they’ve lost three starters for the season – their most consistent performer injured himself in pregame warmups. Two-time NFC Special Teams Player of the Week Zane Gonzalez injured his right quad and was ruled out for Sunday’s matchup against the Buffalo Bills. With no official backup kicker, running back Reggie Bonnafon, wide receiver Brandon Zylstra, and linebacker Frankie Luvu all took turns practicing field goals. Even backup quarterback PJ Walker tried his hand – er, foot – at a few field goals.

Nevertheless, Sunday’s game was a matchup between the league’s No. 1 (Buffalo) and No. 2 defensive units and the first quarter ended with the score locked at 0-0. With no one designated to attempt field goals, the Panthers turned the ball over on downs twice – once at the Buffalo 14 and once at the 50-yard line. Of the latter, Carolina faced 4th & 1 and made the questionable play call of a screen pass instead of a quarterback keeper with the best rushing quarterback in history under center. With the short field, the Bills put together a 6-play drive capped off with a 16-yard rushing touchdown by running back Devin Singletary to give Buffalo a 7-0 lead early in the second quarter. The Bills added to their lead on the next possession when quarterback Josh Allen connected with Stefon Diggs on an 11-yard touchdown pass. Allen was intercepted by safety Jeremy Chinn on Buffalo’s next possession. The turnover led to a Carolina touchdown a few plays later. A end around play to Robby Anderson went for 30 yards, setting up a 4-yard touchdown run by Cam Newton. The Panthers successfully completed the 2-point conversion with n impressive one-handed catch by DJ Moore to bring the Panthers within 6 points with 1:48 left to play in the half. Allen and the Bills used textbook 2-minute offense efficiency – with help from a roughing the passer penalty against Brian Burns – to extend their lead when kicker Tyler Bass booted a 26 yard field goal to end the half. The Bills took a 17-8 lead into the break.

Carolina only got one possession in the third quarter resulting in a punt while Buffalo controlled the clock and added on to their lead with a 20 yard touchdown toss from Allen to Gabriel Davis with 5:52 left in the third quarter. The touchdown drive was extended by a questionable personal foul flag against Bravvion Roy – who wasn’t even in the game. The Buffalo lead grew to 24-8. A promising drive by Carolina stalled out at Buffalo’s 11 yard line when they turned the ball over on downs. A sack by Yetur Gross-Matos forced the Bills to punt from their own 6. Alex Erickson signaled for a fair catch at Buffalo’s 43 yard line, giving the Panthers a short field with 12:23 left to play in the game. Newton and Carolina were able to capitalize on field position this time and used a four play drive culminating in a 23 yard touchdown pass to Ameer Abdullah. However, the two-point conversion attempt failed leaving the score 24-14 with 11:01 left to play.

On the Panthers’ next drive, Newton was sacked back to back by former Panther teammate Efe Obada. In fact, three of the four sacks on Newton came from former Panthers. He was sacked by Star Lotuleilei earlier in the game. Obada’s second sack forced a turnover on downs and the Bills responded with a 14 yard touchdown reception by Davis – his second of the day and the final points of the game as the Bills sent Carolina packing with a 31-14 loss – the Panthers’ last drive ended with Newton being intercepted by AJ Klein – another former Panther.

The loss drops Carolina to 5-9 and Buffalo keeps their postseason hopes alive as they improve to 8-6. Newton finished 18-of-38 for 156 yards, one passing touchdown, one rushing touchdown, and one interception. Allen finished 19-of-34 for 210 yards, three touchdowns, and one interception. Both quarterbacks were sacked four times. Singletary was the game’s leading rusher with 86 yards and one touchdown on 22 carries while Davis was the leading receiver with 85 yards and two touchdowns on five receptions. Newton led the Panthers’ rushing attack with 71 yards on fifteen carries. Carolina is back in division play next week when they host the Tampa Bay Buccaneers in their last home game of the season.