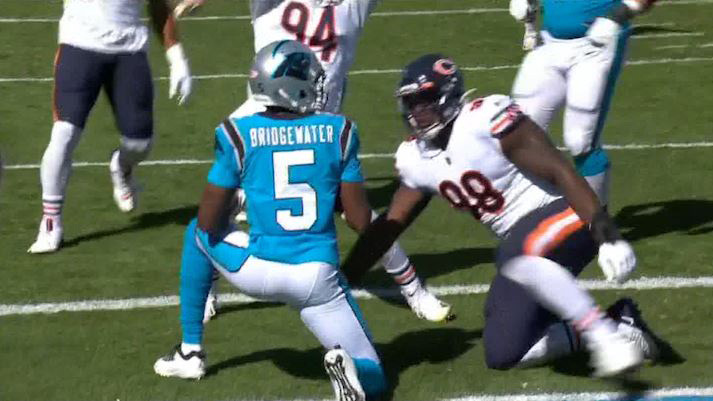 From the first offensive snap, there was a foreboding of a long afternoon here at Bank of America Stadium for the Carolina Panthers.  After starting at their own 10 due to a penalty during kickoff, quarterback Teddy Bridgewater was sacked at the 1-yard line and was intercepted by Chicago Bears safety Tashaun Gipson, Sr.  Gipson returned the interception to Carolina’s 7 yard line.  A few plays later, Bears quarterback Nick Foles found rookie tight end Cole Kmet in a sea of defenders for a 9-yard touchdown reception to give the Bears an early 7-0 lead.

The Panthers woes continued as they began the next drive with yet another penalty and finished out the half settling for two Joey Slye field goals to go into halftime down 13-6.  Bridgewater struggled to a quarterback rating of 22.0 on 5-of-12 passing for 60 yards, and one interception.

The struggles did not stop there as the Panther saw a wild third quarter where running back Mike Davis turned the ball over on a fumble.  The very next play, Panthers rookie safety Jeremy Chinn recorded his first career interception when he picked off Nick Foles.  The game of hot potato was not over as Chicago safety Eddie Jackson returned an interception for a touchdown.  The Panthers caught a huge break as cornerback Kyle Fuller was flagged for defensive pass interference, nullifying the pick six.

After a promising drive, the Panthers stalled out and came away empty handed as Joey Slye’s 54-yard field goal attempt was no good.  The Bears scored their first third quarter touchdown all season on a 1-yard quarterback keeper to increase the lead to 20-6 going into the fourth quarter.

The Panthers finally made it into the end zone on their first possession of the fourth quarter.  Mike Davis punched it in from one yard out after a 33 yard defensive pass interference penalty on Jaylon Johnson put the ball on the 1-yard line.  That’s the closest the Panthers would get the rest of the afternoon as the two teams went on to trade field goals to close out the scoring.  Defense forced a three-and-out to give the offense one last shot with a little under 2 minutes remaining in the game.  Any hopes for a heroic comeback were squashed when DeAndre Houston-Carson intercepted Bridgewater with 1:32 left to play.  Bridgewater finished 16-of-29 for 216 yards, two interceptions, and no touchdowns en route to a quarterback rating of 50.4 while Nick Foles finished 23-of-39 for 198 yards, one touchdown, and one interception.

DJ Moore led all receivers with five catches for 93 yards while Robby Anderson added four receptions for 77 yards.  Mike Davis rushed for 52 yards and one touchdown on eighteen carries.  The Panthers fall to 3-3 while the Bears improve to 5-1.