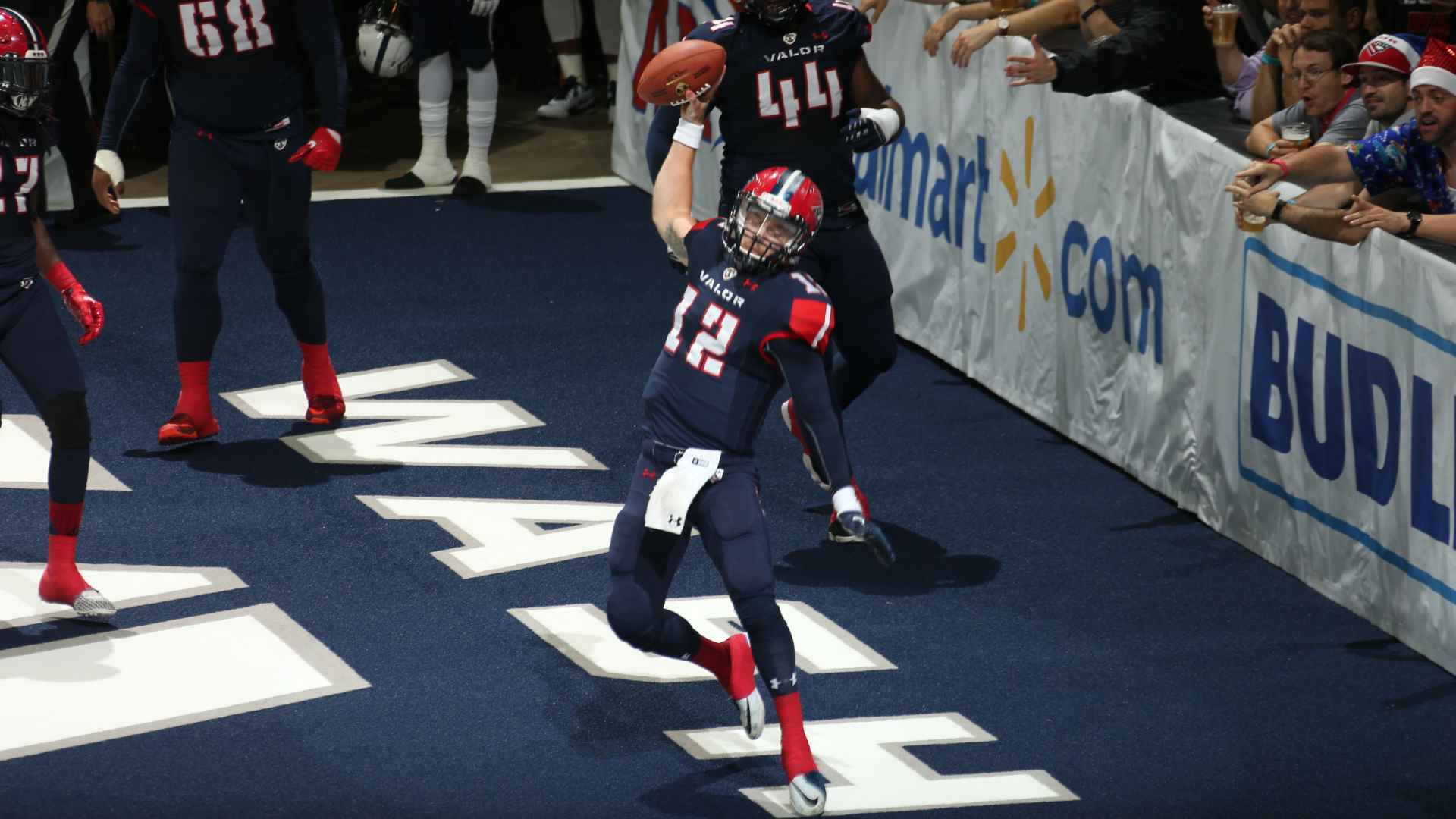 In tonight’s Christmas in July themed game the Valor received gifts that they’ll surely remember. By picking up their 2nd victory of season 34-30 over the Baltimore Brigade, the Valor now still have a chance at competing in the Arena League Playoffs. At 2-10 there was relief inside the Valor locker room. “It feels good to finally pull one these games or tonight”, Head Coach Dean Cokinos said.

In typical Christmas fashion, the Valor brought good tidings to their fans. The Valor faithful had yet to see their expansion arena team win another game, since the first game of the season. Harking on their chance to stay alive in the playoff race, The gift bearers for this victory would also be from 3 men: Sean Brackett, TT Toliver, and Michael Knight.

Brackett and Toliver especially were responsible for tonight’s presents. The two combined for 113 yards and three touchdowns. In the first drive after a Kickoff return for a TD was called back for an illegal block, Brackett found Tolliver on the out route for a quick TD. With Baltimore, they continually answered back with scores on alternate possessions. After the TD run from Rory Nelson to make it tied at 7, Brackett ran for a TD and found Toliver again in the back of the end zone to give them a 21-14 lead at the half.

Baltimore started the second half with a score on their second play from scrimmage when QB Shane Carden found WR Brandon Thompkins for a 36-yard touchdown reception. Surely from a fans perspective, the cause for panic was settling in, The Valor were 1-5 when leading at halftime in games and looked like they were setting themselves up to let this one slip away.

Both teams would trade scores on their ensuing possessions, but a missed point after attempt by the Brigade left Washington with a one point, 28-27 lead after three-quarters.

The fourth quarter allowed the Valor defense to join in the festive occasion. An interception from Knight gave the Valor the opportunity to push the score further but after a failed 4th down goal line conversion, the brigade moved the ball into field range milking the clock down to its final minute to set up a 21-yard field goal from Brigade K Pat Clarke.

Down 28-30 with less than a minute left, The Valor found themselves in trouble. Brackett, who took over the team as the full starter after QB Erik Meyer unexpected retirement,t knew what was at stake and used that as fuel in what would be the game winning drive. On 3rd down inside the Brigade 20, Brackett escaped the pocket and found for a 3rd time Tolliver in the back of the end zone for the go-ahead score.

When asked about what he was thinking on the final Brackett’s answer was simple.  “Just win the game.” He said “Our backs were against the wall [and] we needed a win in the worst way. We’re just trying to stay alive.” Staying alive is indeed what the Valor did after Brackett found Tolliver for the go-ahead score. With less than 3 seconds Knight again intercepted Baltimore’s Hail Mary attempt to seal the victory.

“We’ve played a lot of tight games just like this that we haven’t captured a win, so for our players first and foremost, the organization second and the fans…It was exciting and I think the fans enjoyed it,” Coach Cokinos said after. With this victory and now with an overall record of 2-10 the Valor still have a chance to enter the postseason if they win their final two games of the season.

“I think our fans and our organization got a good taste of arena football tonight.”

Going forward Brackett and the rest of his teammates now know what they have to do and aren’t intimidated by the challenge. “We’re a very hard working group [and] we’re a resilient group,” He said. “With all the losses that we’ve had we come to work every day, I think this week the intensity rose even more – another level – because we know that we have to go 3-0.”