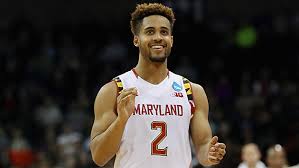 Coming out of high school Melo Trimble was one of the top recruits in the nation. He gained a lot of attention as he dominated high school basketball in the state of Maryland. He recently declared for the 2017 NBA Draft, so let’s dissect his career and point out some potential landing spots:

As a freshman in the 2014-2015 season, Trimble made a name for himself instantly. He is only the third player from Maryland to be named to the USA Pan American Games team. Starting in all 35 games during the regular season, he averaged 16.2 points and three assists per game. He was honored with First Team All-Big Ten (media), Second Team All-Big Ten (coaches), and Big Ten All-Freshman team. At 6-3, 185 pounds, Trimble has the ability to score at will and can spread the floor effectively. Trimble’s 568 points in his freshman season ranked second behind Joe Smith on Maryland’s freshman single-season scoring list.

Although his scoring numbers took a dip, Trimble elevated other aspects to his game during his sophomore season. Not only did he score, but he got his teammates more involved as he averaged 15 points and 5 assists per game. Trimble guided Maryland to back-to-back 27-plus win seasons for the first time in program history. He is also one of only two players in Maryland history to score 500 points in each of their first two seasons, joining former Naismith Player of the Year Joe Smith. Along with that, he took the Terps to the Sweet 16 for the first time since 2003.

His draft stock took a blow after his sophomore year because of the decline of his scoring numbers. Because of that, he then decided to come back for his junior season. This past season, he saw his scoring average rise to a career-high 16.8 ppg while shooting 44 percent from the field. He was once again named to the All-Big Ten First team this season. He also became the fifth player in Maryland history to record 1,400 points, 350 assists, and 100 steals. Coming back for his junior season turned out to be a great idea as his draft stock rose.

Melo Trimble’s draft stock isn’t as great as it was two years ago after his freshman year. Analysts all over the country have recognized Trimble’s improvement and know the talent he has now that his junior season has come to a close. Trimble is not a first-round prospect considering the younger, raw talent that this draft class has to offer. Instead, he is seen as more of a second-round pick. Trimble may not have the ability to immediately start for a team but can be a solid bench player that can learn his role. NBA teams love players with natural talent that can be developed into a player that fits a need for a specific team.

A team like the Dallas Mavericks could be a potential landing spot for Trimble, as they could use a backup guard. They currently have five guards on their roster but could see some of those players leave in the offseason.

Another potential landing spot for Trimble could be the Cleveland Cavaliers. LeBron has spoken out about needing more help from the backup guard position earlier this year. They filled that void with veteran Deron Williams but considering his age, finding a younger player to develop could be ideal.

The Toronto Raptors could also be another potential landing spot for Trimble. Even with six guards on the roster currently, none of them other than the starters are big names. The addition of Trimble could work well considering who he would be playing behind. Kyle Lowry and DeMar DeRozan are two rising stars in the NBA today. Having Trimble play behind those two would help his development into an NBA guard.

Trimble could stay close to home if the Washington Wizards decide to draft him. Other than star guards like John Wall and Bradley Beal, the Wizards do not have much depth at the guard position. Former National Player of the Year Trey Burke is the only recognizable guard on the bench. Adding Trimble to the team could help the scoring off the bench. Letting him develop behind Wall and Beal could potentially turn him into a solid player.

Melo Trimble has left his mark at College Park for the past three years. Being one of the best high school players in the nation to being one of the greatest players in Maryland basketball history, Trimble has all the potential to be an NBA star. With the combine coming up, he has the ability to show his talents off to NBA scouts.