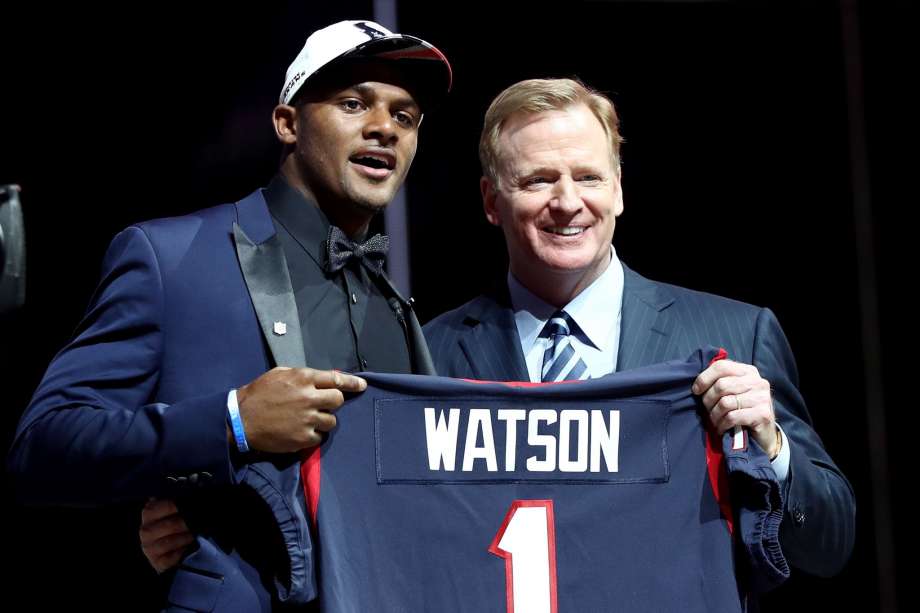 The three day extravaganza known as the NFL Draft is now complete. Seven rounds, 253 selections, and countless amount of boos toward Commissioner Roger Goodell later, we have another draft class in the books. The party started with former Texas A&M defensive end Myles Garrett as the 1st overall selection to the Cleveland Browns. It ended with the most talked about Mr. Irrelevant in recent history, QB Chad Kelly of Ole Miss.

To be fair, the players with their teams are barely acquainted. However, after every draft, it is routinely common to pick out which teams won and which teams dropped the ball. Let’s pick out the winners and losers of the 2017 NFL Draft.

Tennessee Titans – The two 1st round selections of receiver Corey Davis and corner Adoree Jackson addressed two critical needs for the Titans. The insertion of Davis into the Titans offense gives them a true #1 receiver while Jackson is a playmaking corner with extra value as a punt returner. In the third round, Tennessee grabbed a tight end Jonnu Smith, who has a similar skill set to  current starter Delanie Walker.They also added another weapon to the passing element with a 5’11 receiver in Taywan Taylor in the third round also.  A solid selection of linebacker Jayon Brown in the fifth round gives the Titans defense an athletic, rangy linebacker/safety hybrid. The Titans have made considerable steps in recent season and this draft class equips the team difference making talent.

Cleveland Browns – I’ve been a believer in Hue Jackson as the Browns head coach since his hiring in January 2016. He was going to need to time to repair the roster. With last year’s draft class and this one, we may finally see the Browns turn the corner and ascend in the right direction. Grabbing Garrett installs a cornerstone, franchise-building defender. The Browns selected Michigan defensive back Jabrill Peppers at 25th overall and are now tasked with finding a place for his versatile skill set. Adding quarterback DeShone Kizer and tight end David Njoku gives the Browns offense two intriguing prospects that will likely be full-time starters soon. Defensive tackle Larry Ogunjobi is an under-the-radar lineman that is quick and constantly disrupting opposing offensive lines. Cornerback Howard Wilson has size and ball skills and will find his way onto the field one way or the other. The Browns needed a class like this on progress and we may see improvement of the team overall this season.

Texans QB Deshaun Watson – The selections of Mitchell Trubisky and Patrick Mahomes in the top 10 presented a decision for the Houston Texans. The team needed to walk away with a quarterback early in the draft and saw a main target (Mahomes) already snatched up. The Texans traded up to the 12th overall spot and selected Watson to be their face of the franchise. What makes Watson a winner is the fact that he steps into a situation where the Texans are one of the most talented teams in the league on both sides of the ball. Watson has receivers DeAndre Hopkins, Will Fuller, and Braxton Miller plus a 1,000-yard back in Lamar Miller. In addition, he has last year’s #1 total defense to lean on as well. Watson does not have the burden of being on a team that has little around him. A clear victory for the former Clemson quarterback.

Tampa Bay Buccaneers – A team that has flirted with the playoffs last season, the Bucs have truly done well during the offseason and the draft was the cherry on top. Tight end OJ Howard was not expected to be available at 19th overall but surprisingly, he was. Howard and third round selection Chris Godwin adds two playmakers to the Bucs offense. Safety Justin Evans was the Bucs second round selection and his physicality gives the Bucs their most talented safety in quite some time. Fifth round pick Jeremy McNichols is a Doug Martin-like prospect, which is ironic since both are Boise State products. This draft class helps elevate the Buccaneers to a legitimate playoff contender.

Ravens GM Ozzie Newsome – Entering the draft, Newsome was already perceived to be one of the best pure general managers in the game today. Largely in part to his work in past drafts. The focus by Newsome was to upgrade the defense in Baltimore, which has been a staple for the Ravens over the years. Adding corner Marlon Humphrey, outside linebackers Tyus Bowser and Tim Williams, and defensive end Chris Wormley builds a foundation for the future in Baltimore on the defensive side. Newsome is a very strategic general manager and this draft solidifies that imagery.

Los Angeles Chargers – The Chargers will begin their first season in Los Angeles and has an improved roster that will take the field thanks to this draft class. Wide receiver Mike Williams was taken seventh overall and gives the offense a dangerous weapon with Pro Bowl potential. The Chargers also picked the two best offensive guards in the draft in Forrest Lamp and Dan Feeney. A major upgrade for the offensive line. Getting Rayshawn Jenkins and Desmond King in the fourth and fifth respectively shores up the position and both are capable of being the team’s starting safeties by season’s end or the beginning of the 2018 season.

Bears QB Mike Glennon – Imagine being told that you are an important free agency signing with a 3-year, $45 million dollar contract, which also comes with plans to pretty much being the starter for seasons to come. Then see the team you signed with trade to the #2 overall pick to select a rookie quarterback in UNC’s Mitch Trubisky. For Glennon, what he thought would be an extensive paring with the Bears now has the makeup of something temporary.

New York Jets – It appears that the team is punting the idea of grooming a quarterback from this draft. The first two selections of Jamal Adams and Marcus Maye gives the Jets their next starting duo at safety. However, with Josh McCown listed as the starter and Christian Hackenberg and Bryce Petty as the backups, the Jets chose not to add true talent at the position. McCown is obviously not a long-term answer. Right now, he gives them the best chance to win a few games. Which is not truly ideal.

Jacksonville Jaguars – The draft for the Jags fielded first-tier talent in running back Leonard Fournette and offensive tackle Cam Robinson. On the other hand, the selection of receiver Dede Westbrook in the fourth round was unnecessary. Selecting defensive end Dawuane Smoot in the third round was a little puzzling based on the team having better options on the board. It remains to be seen how this draft actually helps the biggest question mark on the entire team: QB Blake Bortles.

Seahawks QB Russell Wilson – Going into the draft, Seattle really needed to upgrade along the offensive line. With Wilson taking a ton of hits this past season, it is drastically important that the line is improved. Out of 11 draft picks, Seattle walked away with a third round center in Ethan Pocic and a sixth round tackle in Justin Senior. Seattle could have added a few more bodies to the line to at worse provide quality depth. So Wilson will enter the season with hopes that the line has improved significantly. The play of the offensive line may dictate how far Seattle will go in the 2017 season.