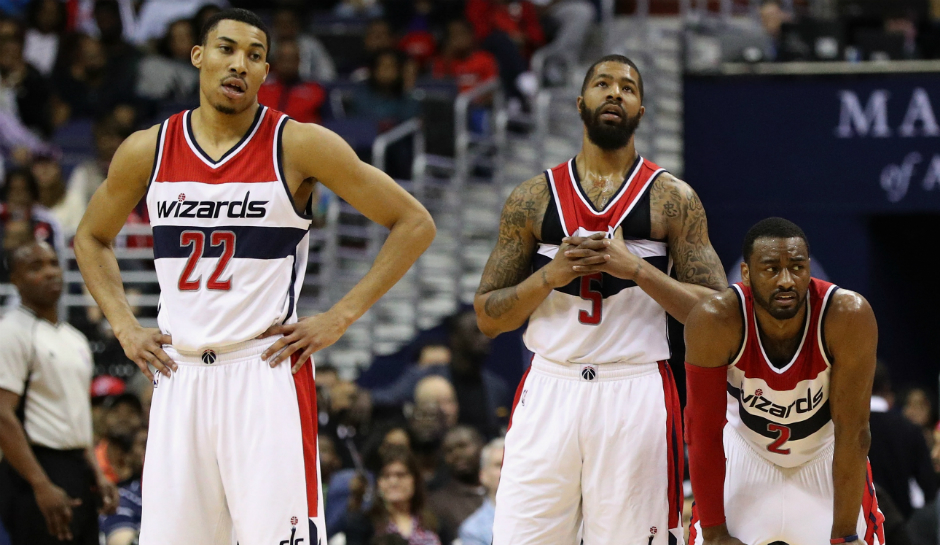 The Wizards were not intimidated by the league’s best team in D.C Tuesday night.  Hometown native Kevin Durant left the game due to a knee injury early in the first quarter.  Washington took full advantage of the opportunity going on a 19-6 run to start the game.  Bradley Beal continues to show why he was an all-star snub.  Beal torched the Warriors for 16 first quarter points on six of seven shooting.  Washington put up 40 first period points against Golden State’s defense.

During the second quarter, Durant was ruled out for the rest of the game.  The Wizards knew how big this game was and had to take advantage. Unfortunately, Golden State made the NBA finals the last two seasons without Durant.  So although they looked like they were out if it, they knew they had a fighting chance.

The Wizards went up by as much as 19 points, but the Warriors answered back.  They closed the gap to 12 points to end the first half.  The Warriors defense stepped up and held Beal scoreless in the second quarter.  Newly acquired Bojan Bogdanovic continues to impress with 12 points in 12 minutes off the bench in the first half.  John Wall ended the half with only four points but dished out 11 assists.

With 10:37 left in the third quarter, the Warriors cut the lead to single digits for the first time since the score was 22-14 in the first quarter.  The Wizards look like their momentum was gone in the second half. Despite not having their leading scorer in Durant, Golden State is still a very dangerous team.  They showed why they only had nine losses on the season.  They outscored the Wizards 36-24 behind Stephen Curry’s 15 third quarter points to tie the game at 85 going into the fourth.  This game was making out to be another close one for the home team.

With 7:22 left in the game, the Warriors took their first lead of the game off a Shaun Livingston jumper.  Markieff Morris came back and hit a huge three-pointer to give Washington a 95-94 lead with 5:35 left.  The game went back and forth all quarter long.  It came down to who wanted it more.

Wizards Hold on for Huge Win

With the game tied up at 106, Wall hit Morris for an alley-oop for his 19th assist (career high) of the game.  Curry comes right back and makes a layup to tie the game at 108 with 41 seconds left in the game.  Washington puts the ball in the hands of their all-star in Wall.

Wall takes a jump shot and misses, but Otto Porter, Jr.grabs his 8th rebound of the game and gets fouled on the putback.  Porter goes to the charity strike with 17 seconds and nails both to give the Wizards a two-point lead.

On the other end, Warriors put the ball in two-time MVP Curry hands.  Curry takes a three near halfcourt and misses it.  Morris grabs his 6th rebound and is fouled.  Morris makes both free throws with three seconds left to give Washington a four-point lead to seal the game and give the Warriors their 10th loss on the season.

Wall 12 points to go along with a career-high 19 assists.  After a hot start, Beal finished the game with 25 points.  Morris had a big game with 22 points, six rebounds and four blocks.  Porter and Marcin Gortat combined for 26 and 20 rebounds.  Bogdanovic had 16 points in 16 minutes off the bench.

Although Washington won without Durant on the other side, this team went to the NBA Finals the last two seasons without Durant.  So this is still a big win for the Wizards and moving forward.  With this win, Washington moves back into third place over the Toronto Raptors.  Consequently, the Wizards next two games are against Toronto.

The Raptors are without all-star Kyle Lowry who had surgery on his wrist.  Although they are without him, they haven’t lost a game since acquiring Serge Ibaka and PJ Tucker.  The biggest player to look out for is Lowry’s all-star partner DeMar DeRozan.  He has taken over since Lowry’s absence, including a game winner in New York against the Knicks last game.

If the Wizards can stop him, they have a much better chance of wining this game.  They also need to keep an eye on new acquisition Ibaka and big man Jonas Valanciunas who have both been playing well since Lowry’s injury.  These two games are huge because this will determine the third seed in the East for now.  It will also be the last game before the Wizards go on their five-game Wets Coast road trip.