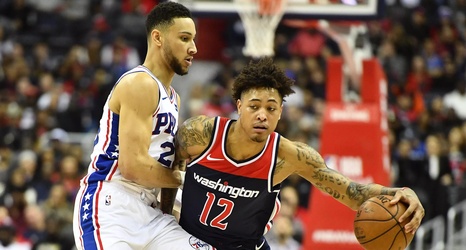 WASHINGTON– There’s no question that the Washington Wizards have been on an emotional roller coaster ever since All Star Break. First it was the win against the “new look Cavs,” then it was the plummeting loss at home against the Charlotte Hornets, a team who most likely won’t make the playoffs, and finally it was the big stage Sunday night where the possibility of homecourt of advantage in the playoffs were at stake.

Going into this matchup the keys to the game were quite simple:

Now when it came to “getting started early,” I was quite precarious when Ben Simmons scored in the first 20 seconds of the game off of an alley-oop from his right-hand man Joel Embiid. That was surely not the start I was referring to. Nonetheless, the Wizards responded by attacking the paint and Kelly Oubre Jr., added two shots from beyond the arc.

The Wizards’ offensive dominance carried on into the 2nd quarter and after a slow start for Otto Porter he finally added some “wavy papi to the floor,” as Bradley Beal would say later on in the postgame about Kelly Oubre. That waviness resulted in 14 points for Otto and allowed the Wizards to go into the half with a comfortable 19 point lead.

While that comfortability was nice heading into the second half, the Wizards’ minimized their double digit lead to eight points late in the 4th quarter after two back to back three pointers by Dario Saric. Washington responded but with under four minutes remaining, Joel Embiid’s three point play minimized the Wizards’ lead yet again to eight points.

The atmosphere in the Capital One Arena was getting tense at that point but thanks to Bradley Beal’s step back jumper he maximized the lead back to double digits and the Wizards snapped the Sixers seven game winning streak with a 109-94 victory. Beal led the team in scoring with 24 points and added eight assists and five rebounds.

This matchup was a true testament of what this Wizards team is capable of. Each player on both the bench and starting lineup had atleast one assist with the exclusion of Mike Scott who was more effective on the defensive side of the ball. If the Wizards continue this ball movement heading into March, they are definitely going to be a true playoff contender.