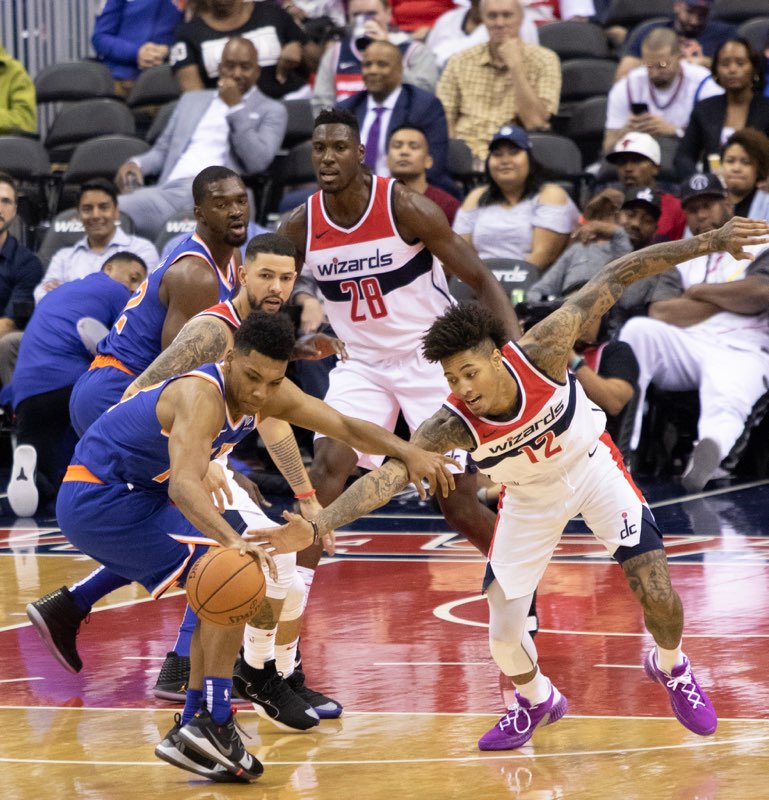 WASHINGTON- A preseason opener at home for the Washington Wizards turned into an overtime thriller with the New York Knicks that ended in a 124-121 loss for the Wizards.

This preseason game was pretty chippy to say the least. Wizards F Markieff Morris was ejected after what was a verbal confrontation with Knicks’ Mitchell Robinson. Morris said after the game, “Obviously, I didn’t like what he [Mitchell Robinson] said and the refs threw me out.”

Scott Brooks emphasized the importance of controlling emotions throughout the game after the referees called 70+ fouls in this preseason matchup.

“We knew going into the game that a lot of the time in exhibitions, there are a high number of free throws. I don’t think any of us thought there would be 90. We have to adjust, and we have to play defense without fouling. I’m sure they will say the same thing also,” said Coach Brooks.

Heading into this game, taking more threes was a point of emphasis for this Wizards team.

“We definitely moved the ball offensively. We did a lot of nice things. We got a lot of good looks, a lot of good open threes. One of the things we’ve talked about, we’ve stressed a lot is taking more threes. We took 38–and forgot to mention we should make some more as we take them…8-for-38. It starts with the defense, and I thought we played defense in the fourth quarter really like NBA defense where you really have to lock down and guard somebody. Too many fouls, too many free throws,” said Coach Brooks.

That aspect of the game was an important part of Ian Mahinmi’s development as he worked on his 3 point shot throughout training camp. On Monday night, Mahinmi completed 1-2 shots from beyond the arc which was a pretty good insight for a big man who knows the scope of the league is changing.

Wizards’ first round pick, Troy Brown Jr., started his rookie debut on a high note with a euro-step finish in the lane to mark his first points in a Wizards uniform. He finished the game with 4 points, 7 rebounds and 1 assists.

Kelly Oubre Jr., led the Wizards in scoring with 15 points followed by Otto Porter with 13.

Porter left the game with a slight ankle sprain but he isn’t expected to miss any time in practice today as they prepare for the Miami Heat on Friday night.