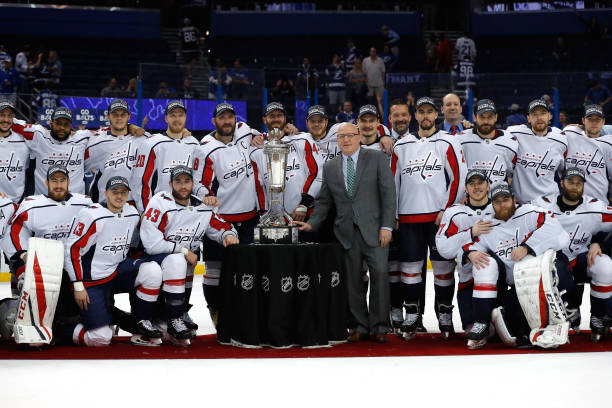 Disappointment and Collapse. For the past few years, those are the words that have defined DC sports.

The Redskins barely find themselves in the position to make the playoffs and when they do you can almost guarantee they’re one and done. The Wizards have consistently made the playoffs lately; but after a game seven loss in last year’s second round and this year’s eighth-seed first round playoff exit; they haven’t provided much hope for a championship season in the near future. Now there’s the Nationals. Every season they compete for the best record in the league and are World Series favorites heading into Spring Training; every season they find themselves at home by time the championship series rolls around.

The years of disappointment and collapse for the Capitals deserves its own Smithsonian museum. After winning back to back Presidents’ Trophies (awarded to the NHL team with the most points at the end of the regular season) in 2016 and 2017; the Caps found themselves losing in the second round of the playoffs three seasons in a row. First to the New York Rangers and then to the rival Pittsburgh Penguins….in back to back years.

Heading into this year’s Stanley Cup Playoffs, the Capitals had a goalie dilemma and provided no confidence that this year would be any different from the past; despite winning the Metropolitan Division for the third consecutive year.

It seems like forever ago now; but the Caps started this year’s playoff run losing their first their first two games, both at home to a lower seeded but favored Columbus Blue Jackets team. Those first two games both included lost leads in the final period and goaltender Philipp Grubauer being pulled before the third period of game 2. The Caps won the next four games and advanced to the second round to face none other than….the Penguins.

This year DC sports fans had feelings of optimism leading into the second round; whether the optimism was justified or not, the feeling was “third times a charm.”

Indeed it was, Ovechkin finally got the best of Crosby and it was the team wearing red that smiled in the post-series handshake line.

At this point everyone knows the narrative. Whether you support DC sports or you’re a casual fan from Arizona; it became a national story that this was the first time a team from the nation’s capital made it past the second round. For lifelong fans in the area; just getting past the second round wasn’t enough. Sure beating the Penguins brought jubilation and excitement throughout the region; but the name of the game is winning the Stanley Cup and nothing less would suffice.

Before that, there was a team from Tampa Bay that stood in the way. Nearly every expert in the country deemed the Lightning as the favorites to win the Eastern Conference Championship. Nearly every expert in the country found themselves backtracking after the Capitals won the first two games on the road to take 2-0 series lead. Tampa Bay won the next three games to push the good guys to the brink of elimination for the first time in this year’s playoffs.

Fans throughout the DMV had been here before and knew what was next. The historic run was over and our disappointment was simply delayed to the third round as opposed to the second. In the past fans had been proven wrong for believing in the team and being let down. This time around that faith began to fade and we were rewarded for our years of loyalty. On the shoulders of back to back shutouts by goaltender Braden Holtby; a major sport championship series will make its way to Washington D.C.

For sports fans in the area, the context can not be understated. This area is so much more than sports though; so what about the people who have been here for those other reasons? This is the nation’s capital; where our President resides, where tourists flock from all around the world.

This moment is for all of the DMV. This is our time to unite, to put the Waldorf jokes to rest, to embrace the history occurring in front of our eyes. This is time to push the politics aside for a couple of weeks and be bipartisan as a region.

If the Capitals have taught us nothing else over that past few years it’s that this opportunity doesn’t come every year so it can’t be taken for granted.