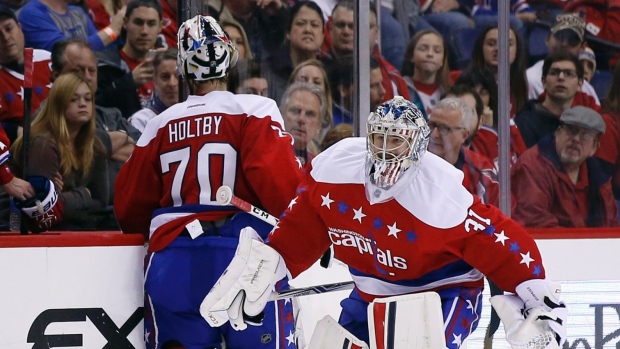 For the first time since 2011, a goaltender not named Braden Holtby will start in goal for the Washington Capitals to begin the Stanley Cup Playoffs.

Philipp Grubauer started the regular season as the backup goaltender for the Washington Capitals, but after Holtby had a rather up and down regular season Grubauer saw an increase in ice time.

“I just think that Grubi deserves the opportunity…It sort of evolved all year. There wasn’t a date or anything like that. It just evolved and Grubi got more games and a bigger body of work.”

Trotz also made very clear that Grubauer is the starter for specifically game one. The rest of the series is up for grabs based off of performance, however he is not committing to alternating goalies.

When asked how he has prepared himself for this moment, Grubauer spoke to his increase in starts during the regular season.

“It helps playing more and more…The more you get on the ice, the more experience you get. You see different situations and different teams. If you sit on the bench, you can get good from watching, but you’ve got to get the experience.”

Holtby has started 59 of the Capitals last 60 Stanley Cup Playoff games; the one game he did not start was won by Grubauer in 2015 against the New York Islanders.