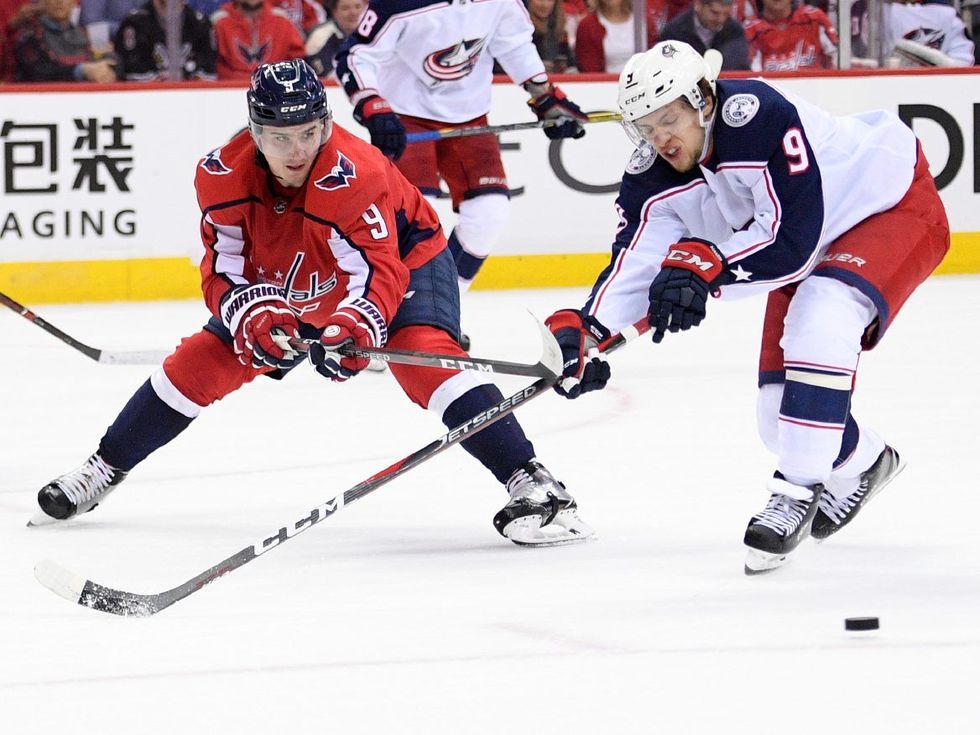 Between the energy from the crowd and the fast pace played by both the Washington Capitals and Columbus Blue Jackets, it was obvious that everyone inside Capital One Arena Thursday night was anxious to get the playoffs started.

The first 17 minutes of game one were fairly even on both sides of the ice. It wasn’t until a five minute major against the Columbus Blue Jackets‘ Josh Anderson for boarding and game misconduct on Capitals defenseman Michal Kempny, when the flood gates opened . Kempny did not return to the game. Look for Anderson to be suspended for game two Sunday night after being ejected for the vicious hit.

Evgeny Kuznetsov scored the first two goals of the series 29 seconds apart during the major Power Play. Both goals were assisted by John Carlson and Nicklas Backstrom.

Devante Smith-Pelly gave Washington the lead back for at the 5:12 mark of the final period. Smith-Pelly’s goal also marked Carlson’s third assist on the night. Jakub Vrana was also credited with an assist on the goal.

Washington could not stay out of the penalty box in the second half of the final period and with 4:26 left in regulation, Seth Jones made the Capitals pay, tying the game 3-3 on an Andre Burakovsky tripping power play and setting up the first overtime in this year’s Stanley Cup Playoffs.

It was a Panarin goal at the 6:02 mark of overtime to give the Columbus Blue Jackets a 4-3 win and 1-0 series lead.

The Caps are no strangers to coming back from behind in playoff series’ and it will be required of them to do so once again despite out-shooting the Blue Jackets 30-27 Thursday night.

Capitals head coach Barry Trotz said earlier this week he was only naming Philipp Grubauer as the starting goaltender for tonight’s game one matchup. After surrendering two different leads, it will be interesting to see if Grubauer’s job is safe for game two.
More predictions and analysis at Doc’s Sports.

Game two will be played in Washington at 7:30 Sunday night