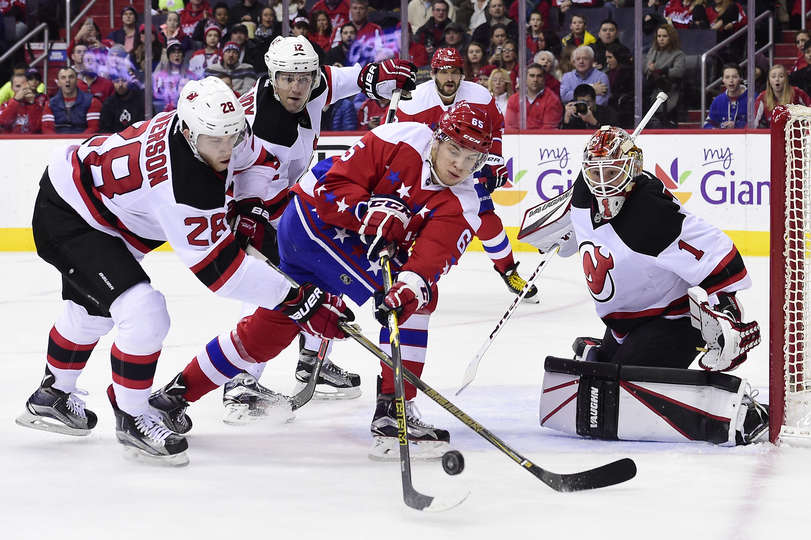 The Washington Capitals lost to the New Jersey Devils 2-1 in a shootout Friday night.

The Capitals’ lone goal in regulation does not reveal the amount of pressure Washington put on New Jersey. The Capitals had 44 shots on goal and four power play chances, yet Kinkaid saved all but one of their attempts.

“Over 40 shots usually will get it done but it wasn’t good enough tonight for whatever reason,” Capitals forward Justin Williams said, according to The Associated Press. “I expect a lot from this group and everybody does also, so whenever we lose it’s certainly never enough and there’s never any silver lining. We expect to win every game and one goal usually doesn’t do it.”

Repeatedly Kinkaid made diving stops or fell to the splits to save Washington’s shots.

With six and a half minutes left in regulation, Kinkaid dove to block Capitals forward Nicklas Backstrom’s wraparound shot. The save kept the score tied at one and helped send the game into overtime.

Later, Kinkaid blocked a shot from Kuznetsov as Kuznetsov entered the crease with six seconds remaining in overtime.

“He was amazing,” Devils forward PA Parenteau said of Kinkaid, per the AP. “He was sensational out there.”

The only blemish on Kinkaid’s outing in his ninth game of the year was a third-period short-handed goal.

In the third period’s fourth minute, Washington forward Daniel Winnik swiped the puck while on the penalty kill. During the ensuing breakaway, Kinkaid deflected Winnik’s shot.

However, Capitals forward Jay Beagle rebounded the deflection and fed it back to Winnik with a backhand pass. Winnik stuffed the pass in for the game-tying goal.

“… when they get a chance, they’re not just getting the puck down the ice; they’re trying to generate something,” Washington head coach Barry Trotz said of Winnik and Beagle’s penalty kill unit, per The Washington Post. “The penalty kill was huge for us. . . . Got us a point tonight.”

Holtby also allowed one goal on the night. He stopped 26 of the Devils’ 27 shots and helped kill all four of New Jersey’s power plays.

Even with Holtby’s 26 saves, he too had one blemish. Parenteau scored the only goal Holtby allowed.

Immediately after a second-period faceoff in the Capitals’ defensive zone, Kuznetsov blindly passed the puck behind him straight to Parenteau. Parenteau then slung the puck past Holtby to break the scoreless tie.

“I think the whole team needed that [win],” Kinkaid said, according to AP. “That could change the season.”

The Devils slid into seventh place in the division, as they improved to 14-15-7.

The same two teams will travel to New Jersey for a Saturday afternoon rematch.