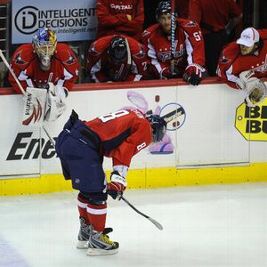 Ahead of their game in Washington on Nov. 16, the Pittsburgh Penguins posted a picture on Twitter of their Stanley Cup banner alongside the Capitals’ division champions banner. The troll sparked a flame in the Capitals, as they stomped Pittsburgh 7-1 that night.

However, the whole situation perfectly suits Washington’s season. In the past four years, Washington has the sixth most wins in the NHL and no rings to show for it. The Capitals won the most games in the league last season, yet they couldn’t survive the second round of the playoffs.

The expectations were lofty again this year for Washington, and some predicted this was their time to shine.

Although the Washington Capitals sit five points out of first place, holes in their offense will keep them out of the Stanley Cup … again.

The most glaring weakness in the Capitals offense is their special teams’ play.

Since the 2012-2013 season, Washington’s special teams have been dominant. Over the past four seasons, the Capitals were the NHL’s best power play team, scoring in 24.1 percent of their chances with a man advantage.

However, Washington’s performance on the power play this year has been mediocre; the Capitals’s rank 19th this season in power play conversion, scoring in 15.6 percent of their chances.

Though this ratio is still great compared to most of the league, it is a slip in his personal performance and timeliness.

Ovechkin’s Plus-Minus best represents his untimely nature. Last year the captain had a Plus-Minus of 21. On the other hand, this year his Plus-Minus is 0.

Even though his 12 goals are the fifth most in the NHL, 284 players in the league have a greater Plus-Minus than Ovechkin, revealing how little it matters when he is on the ice.

In fact, this season Ovechkin has been on the ice for the least amount of time his career. His average of 18:22 on the ice is 2:52 less than his career average of 21:14.

“That was not a conscious decision on my part at all,” Capitals head coach Barry Trotz said on Nov. 15 after Ovechkin played the least amount of time in his career, according to The Washington Post. “Sometimes in the game, just the reps, who’s up, and then all of a sudden you get a penalty or something like that.”

It’s impossible to not play one of the league’s most prolific scorers unknowingly. One thing is on Trotz’s mind: age.

Ovechkin is 31-years-old, and this is his 12th season in the NHL. 860 career games will slow an aging player. With this, Trotz is likely saving Ovechkin’s health for a potential late-season push for the playoffs and the Cup. However, his ineffectiveness in every department other than goals proves Ovechkin is part of the problem.

In the 2015-2016 season, forward Evgeny Kuznetsov, was one of the most important pieces to Washington’s offensive domination.  He led the team with 77 points, 57 assists, and a 27 Plus-Minus.

As one of the players the Capitals relied on the most to lead them to a Stanley Cup Final, Kuznetsov could not be more absent from Washington’s offense.  So far he has nine points, six assists, and a five Plus-Minus.

The 24-year-old looked to be an up-and-coming star until he reverted to his rookie form, leaving the Capitals with one less reliable forward.

Forward T.J. Oshie also disappeared. He sustained an upper-body injury on Nov. 18 and has not played since.

Oshie returned to practice Monday, but Trotz doesn’t intend to play him this week, per The Washington Post.

Trotz hasn’t set a timetable for Oshie’s return. Once he returns, his presence could stabilize Washington’s roller coaster offense.

The Road to the Cup:

For the Capitals to make run at the Stanley Cup, their power play has to be more efficient. Their current status will not make do once the pressure cranks up later in the season and potentially in the playoffs.

In addition, Trotz needs to give Ovechkin more playing time. He earns $10 million annually to score goals, and he cannot do so from the bench. Though his defensive squad has been unstable, giving Ovechkin more chances to score will boost his production. Risking the Capitals’ current well-being for the long run could drop them further in the standings, making their path to the Cup even more difficult if they reach the playoffs.

Finally, somebody must fill the void Kuznetsov left. Veteran forward Nicklas Backstrom has stepped up, scoring 11 points in his last seven games. At least one forward must have strong offensive consistency with Oshie out and Kuznetsov lagging. Backstrom’s pace is hardly sustainable, so his streak is a short-term fix.

Washington is good this season, but inconsistency blocks them from greatness. They have flirted with first place on occasion, but they have also neared fourth.

This wavering defines the 2016-2017 Capitals. They have games when they beat the Penguins 7-1, but they also have times when the seventh place Carolina Hurricanes handle them 5-1.

If this instability continues, the Penguins will have the final laugh. So Tweet away Pittsburgh because Washington will end the season without a Stanley Cup banner hanging from its rafters … again.