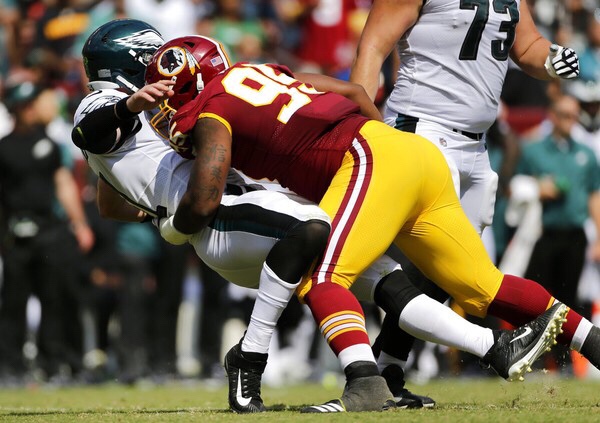 As the NFL and Washington Redskins head into the 2018 Draft Combine, I thought it would be good to evaluate and grade the 2017 draft class.

Last off season, the rather strange firing of Scot McCloughan as the general manager right around the draft combine was perplexing. That situation is actually being adjudicated for improper termination. However it was reported by various sources that team president Bruce Allen, and the front office staff followed the draft board that McCloughan had in place. Either way the Redskins ended up with nine draft picks. Lets take a look a grade each player.

Round 1- DE Jonathan Allen Alabama- Most draft boards had Allen going off the board by the 10th pick. However, injury concern about his shoulder and the jumping of teams to draft QB’s, Allen fell to the Redskins at 17. Allen’s impact was more than the sheer stats. The Redskins pass rush took off with Allen in the middle together with Matt Ioannidis in the middle, pressing the pocket allowing for career years from Ryan Kerrigan and Preston Smith. Allen got a season ending lisfranc injury in the Monday night game against the Philadelphia Eagles. The Redskins definitely nailed this one. Grade- A

Round 2- OLB Ryan Anderson Alabama- In the second round the Redskins continued to address the defense by addressing the outside linebacker spot. The uncertainty of the position behind Kerrigan led to this pick. In 2016 Preston Smith was inconsistent, Trent Murphy was being moved inside and out, and Junior Galette was injured two years in a row. Anderson was primarily the fourth OLB option during the season behind Kerrigan, Smith, and Galette (Murphy was out for the season injured). Most games Anderson did not have much of and impact. In 14 games he only collected 11 tackles. With Galette and Murphy as free agents the Redskins will need Anderson to step up, but do not be shocked if the Redskins draft another edge rusher this year. Grade- D

Round 4- RB Samaje Perine Oklahoma- With no third round pick, the Redskins had two fourth round picks. With the first one the Redskins tried to address their lacking rushing attack. Matt Jones was a bust and Rob Kelley was a great find, however the depth was needed to be addressed. Enter Perine, who was the leading rusher in Sooner history as the backup to Kelley. Perine has some issues holding on the ball but showed some flashes of his talent. His biggest adjustment was taking more handoffs from the QB under center verses the shotgun handoffs he received in college. Perine ended up playing all 16 games and leading the Redskins in rushing with 603 yards. Expect him to be the starter next season. Grade B

Round 4- S Montae Nicholson Michigan State- With their second pick of the fourth round, the Redskins selected Nicholson would was to provide depth to the projected starters of DJ Swearinger and Su’a Cravens. That changed with the retirement/leaving the team of Cravens. That left Deshazor Everett, Nicholson, and Deangelo Hall to pick up the slack. Hall would be on IR for the first half of the season Everette  and Nicholson had to fill in. Nicholson ended up with the starting job and showed flashes of brilliance ( Oakland Raiders game). The only knock on him was his injuries which were mainly concussions. Nicholson played in 8 games and started 6. Swearinger and Nicholson together give the Redskins their best safety tandem. Redskins found a good value pick here. Grade B

Round 5- TE Jeremy Sprinkle Arkansas- In the fifth round the Redskins started drafting the best available or looking towards the future.  Tight end was not necessarily major need with the team having Jordan Reed, Vernon Davis, and Niles Paul. However Reed is often injured and his not a good blocker, Davis had a revival in his hometown but is 34, and Paul is versatile but gets injured as well. Sprinkle is a big body TE that was probably going to be a practice squad player. Sprinkle dressed for 11 games and caught a touchdown. He should be a solid piece for the future. Grade B

Round 6 C Chase Roullier Wyoming-  In the sixth round the Redskins went interior lineman. In 2016 the offense line was a stable unit where the line only started three different lineups. 2017 was a different story however. Every opening day starter missed a game, and the situation got so bad that the Redskins were signing lineman off the street on Fridays and Saturdays and they would be playing on Sunday. Roullier was the backup for Spencer Long and the guards with the team envisioning him taking over for Long. Roullier played well and looks to be the starting center for opening day 2018. Grade A

Round 6 WR Robert Davis Georgia State- In the sixth round the Redskins also took a big and talented wide receiver. One of the knocks of the receiving corps in the past was the lack of size. Davis, who is listed at 6’3″, showed promise in the preseason. While Davis did not make the 53 man roster, he was immediately signed to the practice squad. In week 14 Davis promoted to the 53 man squad and only dressed for one game. Hopefully Davis will continue to improve. Grade Incomplete

Round 7 LB Josh Harvey-Clemons Louisville- In the seventh round the Redskins selected athletic and speedy linebacker Josh Harvey-Clemons. A depth and future pick, Harvey-Clemons showed a ton of promise. Harvey-Clemons showed so much promise the team decided to keep him on the 53 man roster to make sure other teams did not claim him. With the injuries to starters Zach Brown, Mason Foster and backups Will Compton and Martrell Spaight, Josh started to receive playing time.  He dressed in the last 10 games of the season and while making mistakes, showed good toughness and ability. Grade B

Round 7 CB Joshua Holsey Auburn- With their final pick the Redskins selected Joshua Holsey. Another depth pick Holsey showed well for the team this season. His draft stock was low because of two ACL injuries he had in college. However Holsey proved to be a hard worker and ended up playing primarily special teams. Now with Kendall Fuller being traded, Bashaud Breeland a free agent, Holsey will have a chance to earn more playing time. His injuries looked to have healed and the Redskins may have found another late round steal. Grade C+

Looking back at the draft the Redskins did well. Another solid draft will definitely have the team trending in the right direction.