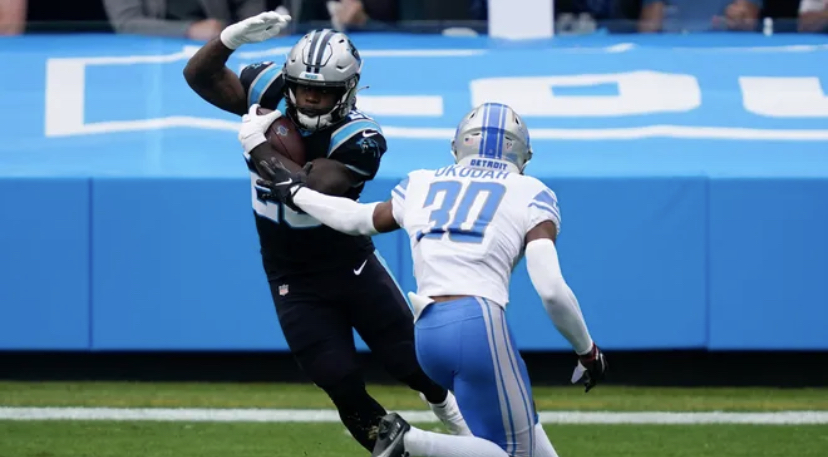 The Carolina Panthers hobbled into Sunday’s home contest against the Detroit Lions missing a number of starters – namely Teddy Bridgewater.  PJ Walker and Will Grier have spent the season alternating as backup quarterback with only Walker having taken actual game snaps.  Bridgewater was downgraded to OUT less than two hours before kickoff and Walker was named the starter.  With the Lions entering the game ranked in the lower quadrant of the league in all defensive categories, this game is as good a time as any to preserve your starting quarterback.

Walker, the XFL’s leading passer at the time of its suspension of play, connected on a 52-yard bomb to DJ Moore to set up a 1-yard touchdown run by Mike Davis.  It was the 9th play of 50+ yards for DJ Moore in his career, a mark that leads all NFL wide receivers since 2018.  Carolina defensive end Marquis Haynes recovered a bad Lions snap at the 22 yard line to give Carolina a short field nearing the end of the fourth quarter.

Facing 3rd-and-goal from the 4-yard line, Walker was intercepted in the end zone by Detroit cornerback Amani Oruwariye.  The Lions were unable to capitalize off the turnover and the Panthers took a 7-0 lead into halftime while holding the Lions to 1-of-6 on third downs – an area the Panthers have struggled in all season long.

The Panthers were able to contain the Lions on third down; the next task was offensive production in the third quarter.  The defensive intensity continued into the second half as the Panthers forced a 3-and-out.  On their next offensive possession, Walker capped off an impressive drive, where he completed pass plays of 18 and 20 yards, with a 17 yard touchdown strike to Curtis Samuel to end the Panthers third quarter drought.  The Lions struggled to get going and had a would-be 51 yard touchdown nullified by an illegal formation penalty to remain scoreless.  A 56-yard field goal by Joey Slye game the Panthers a 17-0 heading into the fourth quarter.

The closest the Lions got to putting points on the board was a missed 51-yard field goal attempt.  The Panthers found themselves in the red zone once again when Walker threw his second interception of the day.  Desmond Trufant came down with the interception in the end zone.  The Lions were once again unable to capitalize as they turned the ball over on downs.  Faced with another short field, the Panthers next drive ended with a 37-yard field goal to cap off the scoring.

It was a miserable day in the office for Lions quarterback Matt Stafford who was sacked five times and finished 18-of-33 for 178 yards.  Defensive end Brian Burns played a part in three of those sacks, tallying two combined sacks and one solo.  Walker, in his first NFL start, finished 24-of-34 for 258 yards, one touchdown, and two interceptions.  DJ Moore led all receivers with seven catches for 127 yards as the Panthers amassed 374 total yards while holding the Lions to 185 yards.  The win snaps a 5-game losing skid for the Panthers and they will travel to Minnesota to face the Vikings next Sunday.