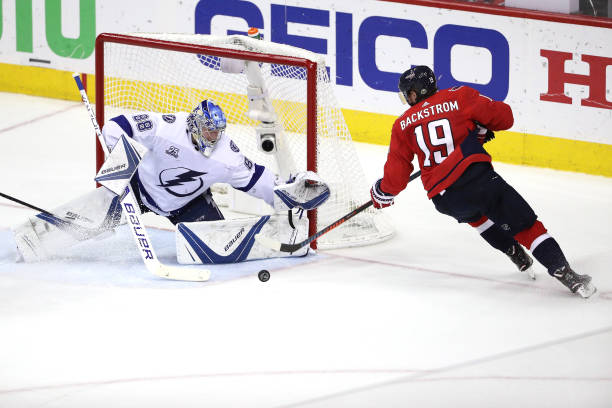 After their worst performance of the postseason in game three; the Capitals looked to bounce back and take a commanding series lead Thursday night.

Capitals defenseman Dmitry Orlov opened up scoring in game four scoring 4:28 into the contest to give Washington an early lead.

It was a lead that did not last long; as Brayden Point tied the game up at 1-1 just 70 seconds later.

Lars Eller got called for his fourth penalty in three periods to give Tampa Bay their first power play opportunity of the night. Lightning captain Steven Stamkos‘ fourth power play goal in as many consecutive games gave the visitors their first lead of the night.

Washington went 0 for 3 on their power play opportunities in the opening period.

Evgeny Kuznetsov started to turn things around for the home team; tying the game on a breakaway at the 5:18 mark of the second period. Kuznetsov’s goal was assisted by first-line mates Alex Ovechkin and Tom Wilson.

Kuznetsov is now tied for the franchise lead for most points in a single postseason. The record was previously held by Ovechkin after he tallied 21 points in the 2009 Stanley Cup Playoffs. Ovechkin currently has 20 points in this year’s playoffs.

WHAT a pass by Ovechkin to Kuznetsov! We're tied at 2!

Tampa Bay goaltender and 2018 Vezina Trophy finalist Andrei Vasilevskiy had 26 saves on 28 shots through the first 35 minutes of regulation to keep the game tied at 2-2 heading into the final period.

Washington’s game four performance was significantly better than that in game three. The Capitals won in nearly every statistical category; including out-shooting Tampa Bay 38-20, and winning in the face-off circle 38-28. The Capitals also out-hit the Lightning 31-21.

Vasilevskiy recorded 36 saves for the second consecutive game in the most impressive goal-tending performance this postseason.

Thursday night’s game 4 saw the return of Capitals center Nicklas Backstrom. Backstrom played on the third line and the top power play line after missing the last four games with a left hand injury. The Capitals star won 66.7% of his face-offs and spent 18:51 on ice recording four shots on goal in his return.

The series is now tied at 2-2 as neither side has won on home-ice thus far.

Game five will be at Amalie Arena in Tampa Bay Saturday night at 7:15pm.