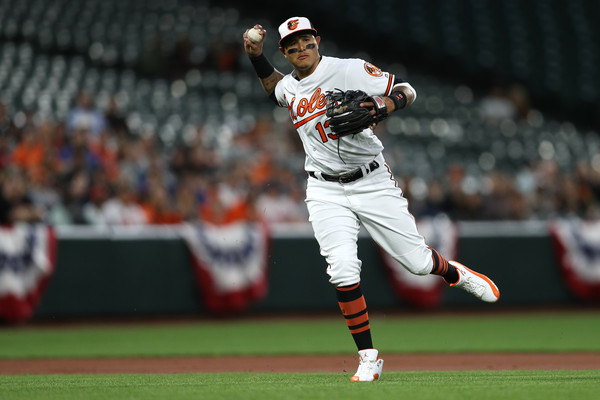 The Baltimore Orioles saw one of their biggest stars in recent memory join the club for Spring Training. Shortstop Manny Machado arrived to Sarasota on Saturday morning with questions abound.

Machado is moving to shortstop full-time, a position that he originally played in high school and moving up through the minors. He has began his career as one of the elite defenders at third base, winning two Gold Glove Awards and one Platinum Glove Award, while logging 6,331 innings at the position in six seasons.

The 25-year old Machado has been the subject of trade talks for the majority of the off-season. There reports that he was almost shipped off to the division rival New York Yankees just a few days ago and has been dangled to the St. Louis Cardinals, Chicago Cubs and the Chicago White Sox, among other teams.

Though 2017 was Machado’s worst slashing season in the Majors (.259/.310/.471), he made strides at the end of the season to improve his batting. He even finished with 33 home runs and 95 RBI (the second highest total of his career). This off-season was about Machado finding his groove at shortstop and he spoke a bit about that on Saturday.

“It’s my natural position,” Machado said of moving to shortstop, via Rich Dubroff of Pressbox Online. “It’s where I think I can be the best at what I’m worth here. I know a lot of the talk has been, ‘Oh, is he going to be worth more there? More money.’ It’s not about the money. It’s not about going out there and signing a 20-year deal.

With his move to shortstop and pending free agency, Baltimore had to make some immediate decisions on his and the team’s future. One of those decisions was to move Tim Beckham to third base, a position that he has only played 52.0 innings at. Beckham has started off his Orioles career with a hot bat, batting .306/.348/.523 in 230 plate appearances in Baltimore, but all of those PAs have come as a shortstop.

“No, no, not that I’ve heard,” Machado said. “We just had arbitration talks and just basically what’s going on with the trade and stuff like that. Kind of communicating with me. But other than that there hasn’t been anything else.”

As stated previously, this is the last year of Machado’s contract with Baltimore. Despite that Machado stays hopefully that he can continue to play with the team that drafted him.

“This is all I know. It’s a great organization that I’ve always played for and gave me an opportunity to come up here and play in the big leagues, but at the same time, there are some things that are out of my jurisdiction, out of my hands. What I can do is go out there and give them the best season I can and see what happens.”

Machado will most likely find a great deal of cash this off-season, wherever he ends up playing. As one of the best young players, playing a position with one of the highest degrees of difficulty at shortstop, he could receive a deal upwards of $300 million.