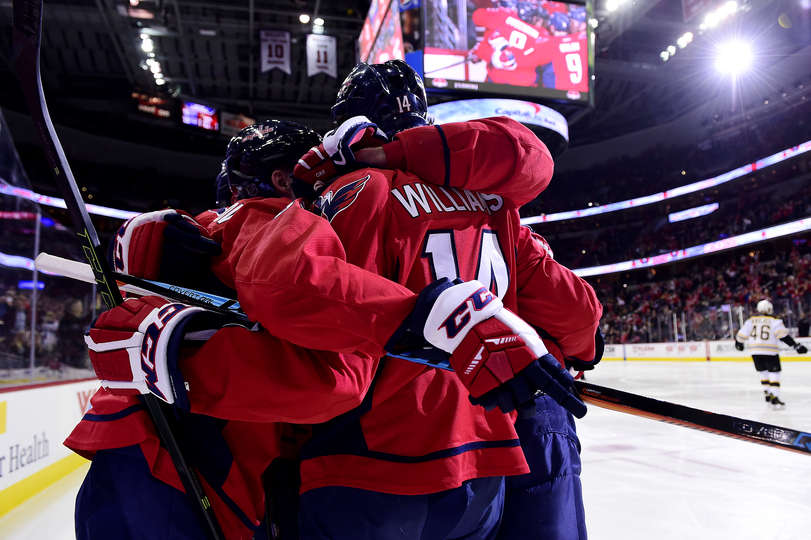 The Washington Capitals blew a three-goal lead over the Boston Bruins Wednesday night but eventually defeated them 4-3 in overtime.

“Every time when you let teams back from a 3-0 lead, it’s not good enough,” Backstrom said, according to The Washington Post. “We want to be a better team … We want to be able to shut teams down.”

The Capitals came out of the gates firing.

Washington forward Justin Williams scored :23 seconds into the game. Fellow forward Evgeny Kuznetsov slung the puck in the net’s direction and Williams tipped it in midair for the goal.

“To be honest it’s nice to see the puck go in the net,” Williams said, per The Associated Press. “I’ve been pressing and working hard. Hopefully, this can springboard me to some more production.”

Kuznetsov’s pass to Williams earned him the goal’s primary assist. Capitals captain Alex Ovechkin also added an assist on the play. He has not scored a goal in his last six games.

Seven minutes later, Williams struck again with the aid of Kuznetsov. Kuznetsov slid the puck to Williams in front of the crease, and Williams smacked it in for his fourth goal of the season.

In the second period, Washington forward Daniel Winnik added another Capitals goal, putting them ahead 3-0.

After the goal, the Bruins came to life, suppressing Washington’s attack.

Following Washington’s aggressive first period, the Capitals put seven shots on the goal the rest of the game. The Bruins had 23 shots in the same span.

Boston forward Dominic Moore tapped the puck in for a goal in the second period’s 17th minute. The score trimmed Washington’s advantage to two.

Soon after, Bruins forward David Pastrnak scored on a break-away, bringing Washington’s lead down to 3-2 heading into the second intermission. Pastrnak’s 16 goals are the third most in the NHL.

After the game, the Capitals held a players-only meeting in the locker room.

“Every time when you let teams back from a 3-0 lead, it’s not good enough,” Backstrom said, according to The Washington Post. “We want to be a better team … We want to be able to shut teams down.”

“It was just making sure we’re on the same page going forward,” Holtby said, per The Washington Post. “It happens every year; you try and build your team that way. Your leaders try and lead the right way.

“There are some things we’ve got to clean up,” Oshie explained, according to AP. “Once we get a step up on someone, we have to get that mentality that we’re going to finish them off.”

On that note, Backstrom added, “In the second and third period they outplayed [us],”per the AP. “We were lucky that we came up with two points. We’re not satisfied at all.”

Oshie returned to the ice for the first time since Nov. 18. He missed seven games with an upper-body injury.

Despite this gain, Washington may suffer another loss.

Capitals defenseman Matt Niskanen left the game in the first period and did not return.

Bruins forward Patrice Bergeron hit Niskanen from behind, crunching the defender’s head into the boards.

The Capitals remained in fourth place in the Metropolitan Division, yet they improved to 15-7-3. They trail the first-place Pittsburgh Penguins by two points.

The Bruins fell to 15-10-2, but they maintained their third place rank in the Atlantic Division.

Washington will travel to Buffalo to face the Sabres Friday night.