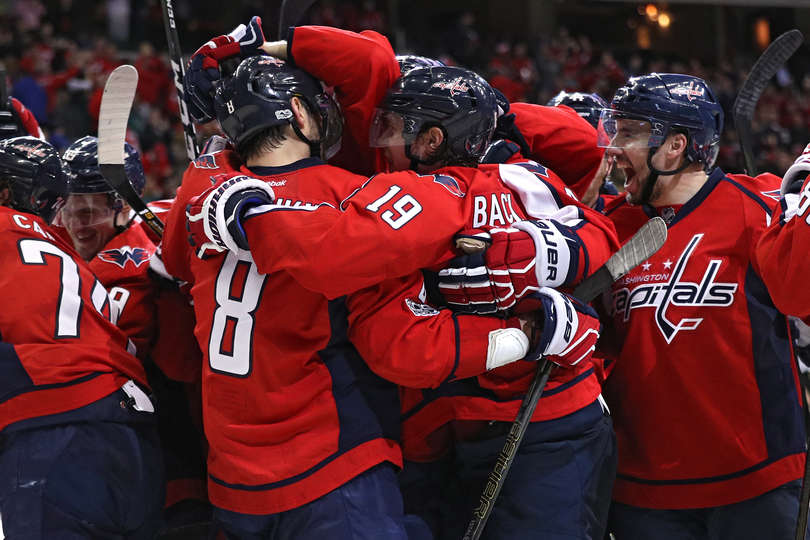 Ovechkin scored the game-winning goal 22 seconds into overtime on a one-timer. The overtime goal was the 19th of his regular season career, tying him with Jaromir Jagr for the most in NHL history.

“It’s fun to play against those guys,” Ovechkin said, according to The Associated Press. “It’s always fun to watch how they change. They’re young[. They’re] fast, obviously have lots of skill up front. It was a great game.”

The Maple Leafs scored three goals in the first period to chase Capitals goalie Braden Holtby from the ice. Holtby ended the night having allowed three goals on eight shots from Toronto.

Washington goalie Philipp Grubauer replaced Holtby after the first frame and finished out the night’s goaltending duties. Grubauer went on to save 15 of the Maple Leafs’ 17 shots.

During the offensive onslaught, six different Capitals scored on Andersen, and nine notched points off of him.

Washington eliminated three deficits on the way to its third straight win.

Williams scored a power-play goal less than two minutes into the game on a deflection off his skate. Williams added assists on goals from forwards Evgeny Kuznetsov, who had not scored in 17 games, and T.J. Oshie.

“It felt like we needed a little excitement in here,” Williams said, per The Washington Post. “Certainly, I think we just kind of willed our way to that win. It was fun and exciting for everybody.”

Williams has three goals and eight points in his last five games.

Washington defenseman Dmitry Orlov completed the Capitals’ second comeback of the night with a one-timer goal. Teammate Matt Niskanen fed Orlov the pass after a fake slap shot, opening the lane for Orlov’s second goal of the season.

Washington defenseman John Carlson scored off of a rebound to eliminate Toronto’s third, and final, lead.

“It’s very unacceptable to continue to go down that road,” Maple Leafs forward Auston Matthews said, according to the AP. “We’re continuing to play well in the first, second period, get leads and then kind of explode on us, so it’s definitely something we want to clean up.”

Matthews had two assists on the night, extending his points streak to seven games. Matthews earned one of his assists on a spinning pass from behind the net to forward Leo Komarov. Komarov tapped the pass in for the power-play goal to put Toronto ahead 4-2.

Maple Leafs forward Nazem Kadri also scored on the power play. Toronto scored in two of its six power-play opportunities on the night.

“I thought the power play was good enough, but we weren’t good enough,” Babcock said, per AP.

Prior to Tuesday’s game, the Capitals had killed 29 straight penalties and 40 of the last 41 they faced.

Washington improved to 23-9-5 while remaining the fourth place team in the Metropolitan Division. The Capitals trail the third-place New York Rangers by 2 points.

The loss dropped Toronto to 17-12-8 and ended its five-game winning streak. However, the Maple Leafs moved into fourth place in the Atlantic Division with the Tampa Bay Lightning’s loss.

The Capitals will host the Columbus Blue Jackets Thursday night. Columbus has won 16 consecutive games and is one win shy of tying the longest winning streak in NHL history.

The Maple Leafs will travel to New Jersey to face the Devils Friday night.