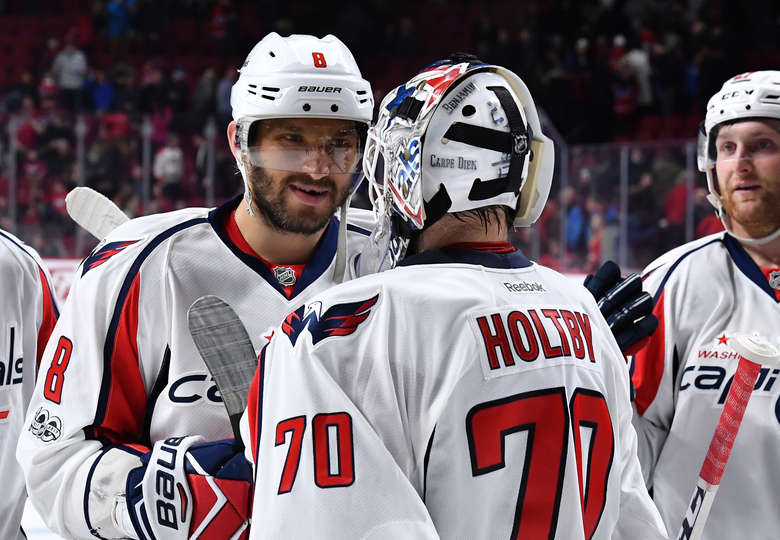 Washington captain Alex Ovechkin scored a goal and earned two assists on the night to bring his career point total to 999.

Ovechkin’s goal was the 544th of his career, tying him with Canadiens legend Maurice Richard for 29th all-time.

“It means I’m getting older,” Ovechkin said of the milestone, according to the AP. “I remember my first year, my first game, like it was five minutes ago.”

Ovechkin scored his 19th goal of the season in the third period while the Capitals were on the power play. The power-play goal was Washington’s first in 175:44 of game time. The Capitals last scored a power-play goal on Jan. 3 during their 6-5 win over the Toronto Maple Leafs.

Ovechkin added assists on goals scored by forwards Nicklas Backstrom and Evgeny Kuznetsov. Both Backstrom and Kuznetsov scored a goal and an assist Monday night.

Kuznetsov has scored eight points in his last four games. He earned his assist Monday night by intercepting a pass and feeding it to forward Brett Connolly. Connolly flicked the pass in for his fifth goal of the season.

Canadiens forward Tomas Plekanec scored the lone goal Holtby allowed on a third-period Montreal power play. Plekanec scored as the Canadiens surrounded Holtby and repeatedly fired shots at him. The puck crossed the goal line as Holtby fell to the ice.

Plekanec’s goal was the first Holtby allowed in 169:12 of play.

“[Holtby has] been really good,” Trotz said, per The Washington Post. “Especially the last three games, he’s been exceptional.”

Holtby had two straight shutouts prior to Monday’s game. The NHL named Holtby its Third Star of the week Monday morning for his performance in the past week. The NHL gives the award to the player with the third best performance in the league each week.

While Holtby controlled the Canadiens, Montreal goalie Carey Price struggled to manage Washington’s offense. He saved 35 of the Capitals’ 39 shots in the game. Washington had 16 more shots than Montreal.

“The Capitals didn’t give us many scoring chances,” Canadiens head coach Michel Therrien said, according to AP. “They were solid defensively while, at the same time, we weren’t sharp.”

Washington improved to 26-9-5 while moving into third place in the Metropolitan Division. The Capitals, Penguins and Rangers all have 57 points and sit three points behind the first-place Columbus Blue Jackets.

Trotz won his 684th game as a head coach, tying him with Pat Quinn for the seventh most in all-time.

Montreal fell to 25-10-6 but maintained its first place spot in the Atlantic Division.

The Capitals will host their rival, the Pittsburgh Penguins, Wednesday night as Ovechkin seeks his 1,000th career point.

The Canadiens will travel to Winnipeg to face the Jets Wednesday night.