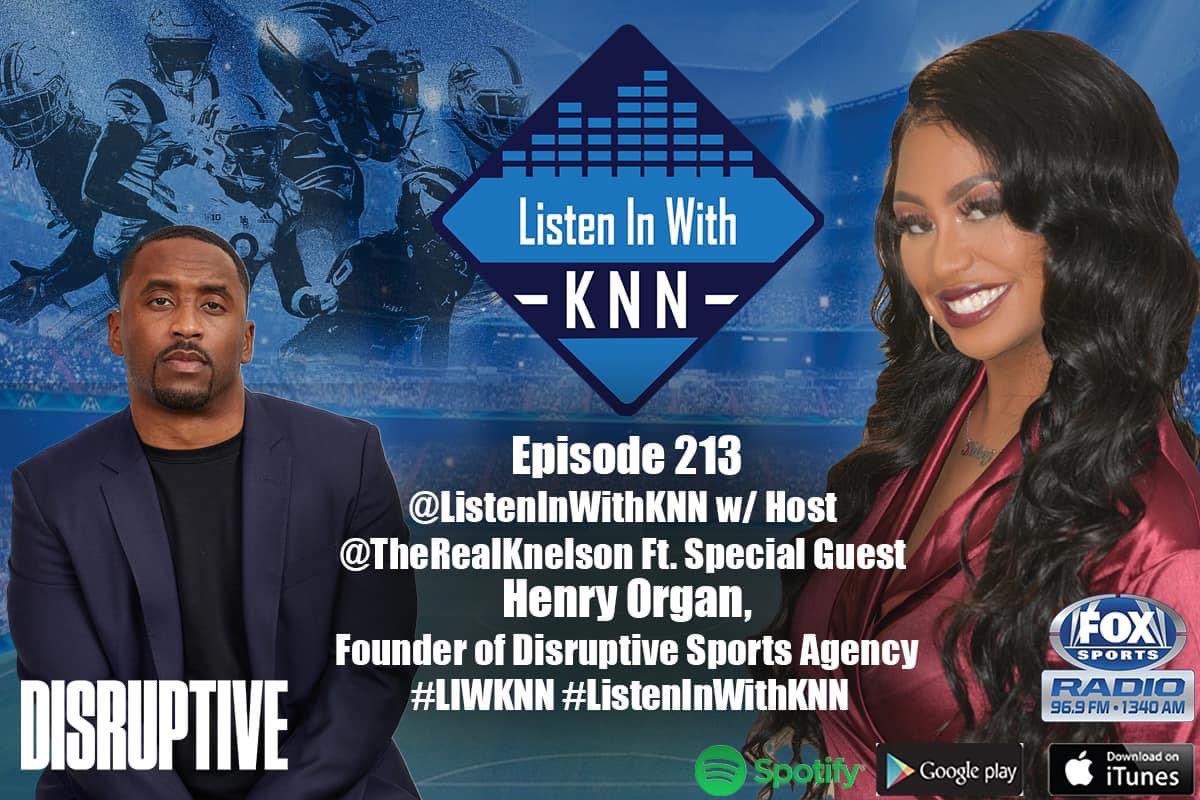 Disruptive was created to empower the player through innovation. “It’s time for a change. The agent business has adapted and evolved. You’re not just negotiating contracts on the field as the primary thing. You’re negotiating everything else in the player’s life so for me, I wanted to create an agency that really focused on minority men that have the highest chance of going broke when they finish playing and while they are currently playing,” said Organ.

With the 2022 NFL Draft kicking off this Thursday, Nelson and Organ discussed preparation for the draft, and the work that continues the moment a player gets his name called. They also touched on the other side of the things: those who don’t get drafted and the different paths they can pursue to still accomplish their dreams.

Organ said many sports agencies have different philosophies when approaching the draft. He runs a playbook that starts two or three weeks before the Draft. “I start to build up my board, look at team rosters, see what guys are going to potentially fit,” said Organ. Additionally, he checks in with scouts to see what they are thinking which helps manage expectations and leverage interest.

This year, Organ has hopes that Samouri Toure, a star wide receiver from Nebraska, will be the first drafted under his agency. Pro Football Focus recently named Toure to their 17 underrated prospects who could go earlier than expected. Toure has had pre-draft visits with the Indianapolis Colts, Green Bay Packers, Seattle Seahawks, Kansas City Chiefs, and Cincinnati Bengals.

“Samori Toure is a direct descendant of Samori Toure from West Africa and I expect him to be Disruptive Agency’s first draft pick. I try to sign players that fill a void whether that’s star power for the agency or that’s a player that has a really great story or a player that maybe would help shine light on another player’s ability to help one another,” said Organ.

Organ said that the NFL Draft is the moment that every kid looks forward to whether you’re an athlete or an agent. “There’s still a lot more to do but it’s a validation that you belong,” said Organ.

New England Patriots TE Devin Asaisi, New England Patriots WR Kendrick Bourne, and Miami Dolphins LB Brennan Scarlett are currently the three NFL players who are clients of Disruptive. “Each client I really do believe I hand-picked because they’re all meant to benefit one another. They all have certain qualities that are different from one another that can make each other better,” said Organ.

Scarlett, an outside linebacker for the Miami Dolphins, is a veteran player who is very valuable to Organ. “For me, I look at Brennan as one of my top clients because he’s somebody that can see what I can see and facilitate or regurgitate what I can do better,” said Organ.

Not getting drafted is not always the worst thing, according to Organ. “It’s actually a better thing because you now get to pick the team that you want to go to and as an agent, you can negotiate more guarantees for a player than if he was drafted so you have a little bit more clarity on where he’s going to end up landing,” said Organ.

With the average NFL career being 3.3 years, a key component to Disruptive’s work is making sure their clients are financially literate. In Organ’s experience, many NFL players aren’t able to manage their money properly and go broke while in the league. “You’re not seeing players buy houses their first two years in the league. Their financial advisor’s telling them you don’t know where you’re going to be or they don’t understand how to purchase. Homeownership is the quickest way to build generational wealth,” said Organ.

Organ wants to help his clients achieve the best they can have on and off the field. “They can still have the chains and the cars, and have a house and have an income property, and put investments away, and set their kids 529 plans. There’s a lot of different ways to do it and still be who you are,” said Organ.

In order to do this, Organ creates a structure and schedule for himself. During the season, his Mondays and Tuesdays are client check-in days to see how they’re feeling. On Fridays, Organ goes through the agency’s budget, his personal budget, and what clients have/have not spent. While Organ doesn’t spend much time recruiting, he does spend time with his clients who he expects will do the recruiting for him. “I try to make sure I give my clients my very best so they can continue to excel and I use them as my marketing material,” said Organ.

As someone who comes from a background of Black excellence, Organ applies principles from his grandfathers. “One of them is have a vision. Have a vision, find the man that’s done what you want to do and seek their advice. And another principle that he had was never listen to anybody that hasn’t been where you wanted to go,” said Organ.

Organ wants to continue growing Disruptive by expanding to every sport and bringing additional agents who have the same mindset as him. “I want to grow Disruptive into one of the biggest agencies that ever was. When you think of the top five sports agencies in the world, I want you to think of Disruptive. That’s the ultimate goal. How we get there and the time it takes, that’s on me,” said Organ.

There are multiple ways to watch the 2022 NFL Draft starting tomorrow at 8 p.m. ET (round one), Friday at 7 p.m. ET (rounds two and three), and Saturday at noon (rounds four-seven) on NFL Network, ESPN, and ABC.