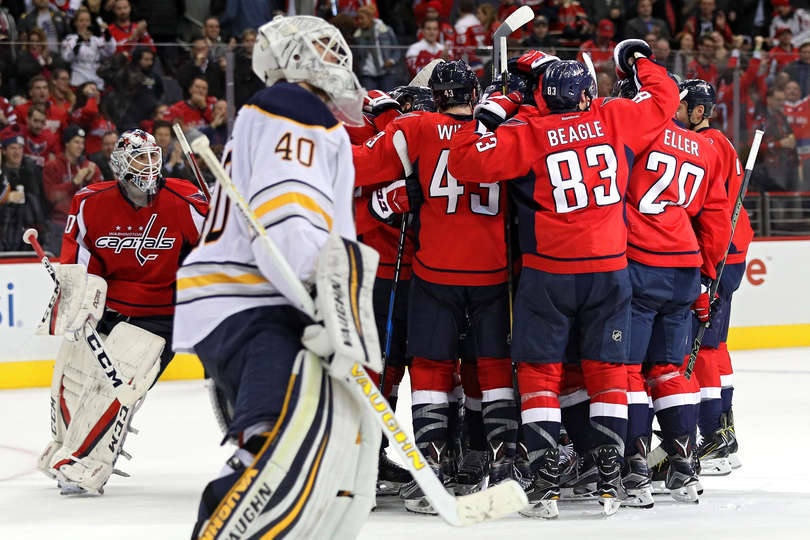 The 1-0 deficit put Washington in the familiar place of playing from behind. The Capitals have not held a lead since they last played the Sabres on Nov. 25 when they beat them 3-1.

Entering the game, Washington had scored one goal in its last 128 minutes of play.

“It’s a big win for us,” Capitals head coach Barry Trotz said, according to The Washington Post. “We needed to get mad and play the right way.”

Capitals defenseman Brooks Orpik slung the puck across the ice to Beagle who tipped it in for the goal to tie the game at one.

“We catch a break and then they bury on us,” Beagle said, per The Washington Post. “It was frustrating, obviously … Things are — I think they just don’t go your way when you’re not playing the right way.”

The Sabres’ aggression showed through their shots on goal. Buffalo outshot Washington 16-7 in the second period.

During the second intermission, Trotz gave an emotional speech to the team, according to Comcast Sports Network. His words had an effect on the Capitals, as they came out shooting in the third period.

Washington played with more aggression in the third frame and turned the tide by outshooting Buffalo 16 to 9.

Trailing 2-1, the Capitals went on the power play in the third period’s 14th minute. Five seconds into the man advantage, Washington defenseman John Carlson shot the puck through traffic. Teammate Marcus Johansson deflected Carlson’s shot midair into the net for the equalizer.

The Capitals rank 23rd in the league in power play scoring percentage. However, they have scored a power-play goal in each of their past two games.

Neither team scored in the game’s final minutes, sending the matchup into overtime.

Johansson came through again in overtime.

At the 2:38 mark of the extra period, Johansson delivered a one-timer past the catching glove of Buffalo goalie Robin Lehner.

“I mean give them credit, they’re a good team, but I think we’re starting to sit back and they have speed, you know?” Lehner said, according to the AP. “I think we see that we can play. We’ve just got to stop changing, changing how we play.”

Johansson leads Washington in game-winning goals with five. His latest was his 11th goal of the season.

“It wasn’t pretty, but we got the puck deep and we got it done, and that’s all that matters,” Johansson said, per AP.

Johansson has the second-most goals on the team. Only captain Alex Ovechkin has more goals than Johansson.

Holtby’s 31 saves on 33 shots kept the Capitals in the battle.

“In a game where it’s sometimes not going our way, we’re battling through it,” Holtby said, according to The Washington Post. “It’s grinding it out; it’s not pretty or anything like that. We fought our way to find a victory, and that’s what good teams do …”

Ovechkin extended his goalless streak to five games. His Plus-Minus now sits at -1.

Even more detrimental than his lack of production is Ovechkin’s penalty frequency.

In the past three games, Ovechkin has five minor penalties, including one Monday night.

“Unacceptable,” Trotz remarked, per the AP. “He’s their leader. He can’t take those penalties. I’m going to address it harshly with him tomorrow.”

Capitals forward T.J. Oshie did not play Monday. He has missed seven straight games and has not played since Nov. 18.

However, Trotz said it was “possible” for Oshie to return this week, per The Washington Post.

Washington improved to 14-7-3 but remained in fourth place in the Metropolitan Division.

Buffalo fell to 9-10-6 and stayed in eighth place in the Atlantic Division.