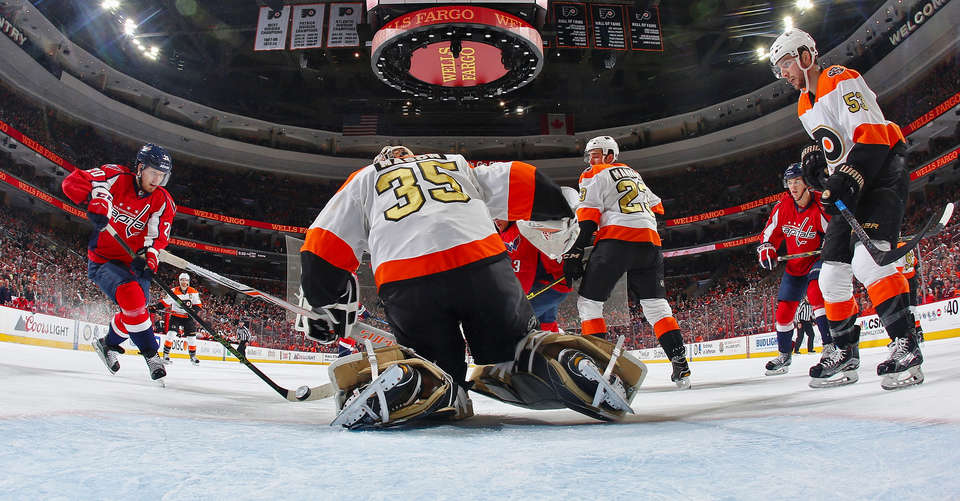 With Vice President Joe Biden in attendance, the Philadelphia Flyers beat the Washington Capitals 3-2 Wednesday night in a shootout.

For the second time in five days, Washington forward T.J. Oshie led off the Capitals’ half of a shootout with a goal.

In the team’s next chance, Philadelphia forward Wayne Simmonds deked Holtby and landed a top-shelf shot to give the Flyers the lead in the tiebreaker.

Philadelphia was on a two-game losing streak before Wednesday’s win.

The entire matchup leading up to the shootout was rough and aggressive. Washington and Philadelphia had a combined 70 hits in the game.

The offenses matched this level of aggression, as each team put 38 shots on the goal. Despite this offensive production, Holtby and Mason were stingy. Both goalies saved 36 shots.

“The real hockey was what was good tonight,” Holtby said, per The Washington Post. “It was two good teams.”

Mason matched Holtby, diving to save multiple shots while on the penalty kill in the last ten seconds of regulation.

“Mason was a great backstopper for us,” Flyers head coach Dave Hakstol said, according to the AP. “He’s a confident goaltender in all areas of the game.”

Washington’s third line scored both of its goals on the night.

Capitals forward Andre Burakovsky opened the game’s scoring in the 19th minute of the first period.

Before his goal on Wednesday, Burakovsky had not scored in 26 straight games. He last scored on Oct. 13. Burakovsky was a healthy scratch in Washington’s previous three games.

“It was a lot of fun to finally get one,” Burakovsky said, per AP. “When I saw the puck go in, I was kind of shocked.”

Philadelphia forward Michael Raffl tied the game at one with a wraparound shot five minutes into the second period. Although Holtby and teammate John Carlson kept Raffl’s shot from hitting the net, a review revealed the puck crossed the goal line.

Forward Lars Eller regained Washington’s lead halfway through the second period, tapping the puck in off of a rebound.

“We felt like we were right there the whole game,” Eller said, according to The Washington Post. “It was a close game, and it could’ve gone either way. Tiny, tiny small things can make the difference, like it did today.”

“Big picture, [Eller] and Burakovsky, I thought, were really good …,” Capitals head coach Barry Trotz added, per The Washington Post. “That line got us the two goals.”

Neither team scored in the third period, sending the game into overtime.

The loss dropped the Capitals to 19-8-4 and kept them in fifth place in the Metropolitan Division.

The Flyers improved to 20-11-4 and maintained their fourth place spot in the division.

Philadelphia will travel to Newark, New Jersey to face the Devils Thursday night.