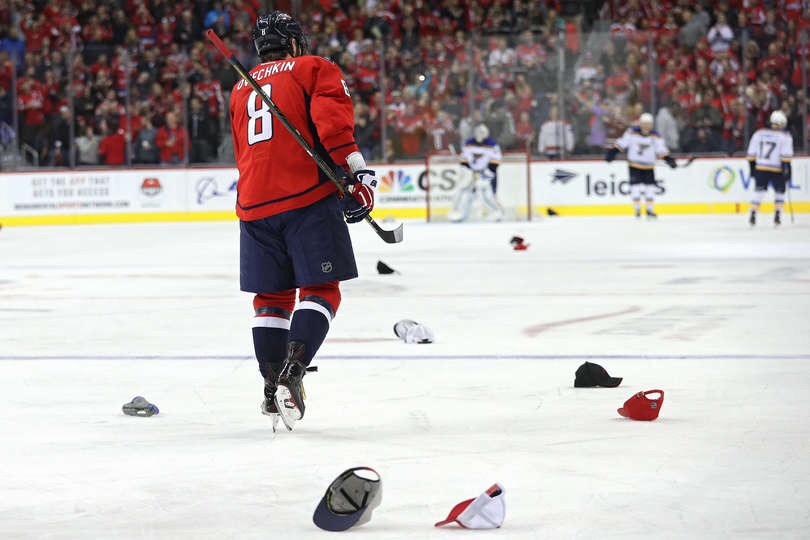 Fans showered caps onto the ice Wednesday night for Alex Ovechkin’s hat trick during the Washington Capitals’ 4-3 win against the St. Louis Blues.

Washington’s captain broke the 0-0 tie with a power-play goal in the game’s 18th minute.

The top-shelf shot gave the Capitals their fourth power-play goal in as many games.

Ovechkin delivered again 10:12 into the second period. He scored his second of three goals on a one-timer from the left faceoff circle.

“It’s fun to watch when [Ovechkin is] making the shot and when he’s feeling it,” Washington forward Evgeny Kuznetsov said, according to ESPN. “It’s tough to stop him.”

The forward completed the hat trick in the 7th minute of the third period with a break-away goal. Ovechkin swiped the puck in Washington’s defensive zone and completed the break himself. The goal was unassisted.

“[Ovechkin] played with an excitement again,” Capitals head coach Barry Trotz said, per The Washington Post. “ … Sometimes we say he’s not scoring enough and all that.”

Ovechkin also scored a hat trick in his last outing against the Blues. He now has 13 goals in 14 career games against St. Louis.

Kuznetsov has disappeared from the offense this year.

In the 2015-2016 season, Kuznetsov led the Capitals in points and assists. However, Kuznetsov’s year has been nothing like his last. He entered the night seventh on the team in points and fifth in assists.

Kuznetsov came alive netting his third goal and sixth assist of the season.

Washington and St. Louis had 11 penalties combined.  Six of these came in the first period.

“When you don’t use your legs, you end up using your stick, and that’s what’s happened,” St. Louis head coach Ken Hitchcock said, according to ESPN. “There’s too many of them early in the game. It sends the wrong message to the rest of the team.”

Shutdown defense was absent in critical times for both teams, as they each surrendered a power play-goal and allowed two scores in the third period.

The Capitals’ defense collapsed late in the game.

With 1:16 left in regulation, Washington led 4-1. Over the next minute and 44 seconds, the Capitals let up two goals and came close to allowing a shot at the equalizer.

Tarasenko also scored in the 11th minute of the second period.

“[Tarasenko is] a dangerous guy out there,” Ovechkin told CSN.

Before the Blues’ late onslaught, Washington goalie Braden Holtby had saved 11 of 12 St. Louis shots on goal. During those final minutes, Holtby saved seven of nine Blues shots. He ended the night saving 18 of 21 overall.

Washington forward T.J. Oshie left the same game with an upper-body injury. However, Oshie is week-to-week and has no time frame for his return.

The win brought the Capitals to 12-5-2. Washington remains in third place in the Metropolitan Division, trailing the Pittsburgh Penguins by one point.

The Blues slid to 11-7-3. St. Louis maintains its second place spot in the Central Division.

The Blues will start their own five-game home stint when they host the Minnesota Wild Saturday night.